Any episode that provides a day-in-the-life of a specific character can be very interesting.  To see the ship through the eyes of a single character gives an insight that you would normally not get.   This episode follows Data throughout his duties in the episode that aired on January 7, 1991, this is Data’s Day.

We follow Data this episode as various events take place throughout the ship.  From the wedding of a fellow crewmate to a vital mission involving the Neutral Zone, we get a crewman-eye-view of the Enterprise. As we explore the day, we find a unique perspective unlike anything we have seen on the series so far. 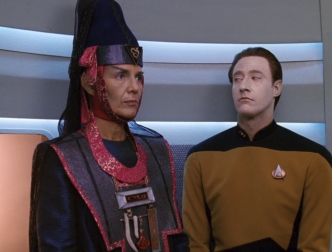 The series begins with Data recording a transmission to Commander Maddox at the Daystrom Institute. He is giving a report on his interactions with his fellow crewman, specifically the union of Keiko Ishikawa and Miles O’Brien.  In addition, a dignitary from Vulcan has arrived for a special mission with the Romulans.

I won’t bore you with the details, because this one is somewhat a hectic story, but the wedding happens with Picard officiating, we see Doctor Crusher and Data dance and the Vulcan ends up being a Romulan Spy.   Overall it is a filler episode that is heavy on  character development for Data, but not much more. Seriously, this season deserves better.

As I said above,  as a character development episode it certainly accomplishes it’s task.  We get to see Data go about his day on the Enterprise.  We get a very good view of his life during and outside of what we usually see and that, in itself is fascinating.  This is one episode that would not be good for a casual fan or a someone just getting into Star Trek, but it is good for fans who wish to know more about Data and enjoys seeing the in’s and out’s of the crewmen.  This also give us a chance to see a more personal view of Data’s journey to becoming human. Actor Brent Spiner does an amazing job, as usual, in his portrayal of Data but it almost feels as if the production team realized they needed some quick character development for Data but didn’t have the time to let it play out over a few episodes so they just crammed as much as they could into one, somewhat chaotic, entry.  This is also what happens when they just don’t have a strong enough ‘A’ plot and have to rely on the weaker ‘B’ plot to carry the episode.

While it is not a great Episode, it does it’s job admirably and is certainly not one of the worst that have aired. 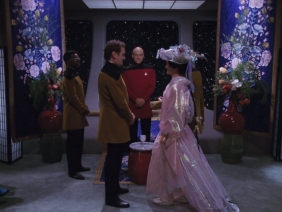 This is an episode of firsts.  We meet Keiko O’brien for the first time, we see the ships barber shop, we see Data dance, and more.

Keiko will later become a regular guest star on this series and eventually a regular character on Deep Space Nine along with her husband Miles O’Brien.   It is certainly a cool continuity between the two series and allows for some really terrific connections.

There is a terrific scene where Data and Crusher dance.  This was a great chance for the actor, Gates McFadden to show her skills as a dancer as, prior to the series, she had been a fairly well known dance choreographer whose works included the famous film, Labyrinth.

One very interesting bit is, while she ends up being a spy, the Vulcan Ambassador T’Pel negotiating with the Romulans is a little foreshadowing of things to come later in the series.

We also get to see the day/night cycle on the Enterprise bridge for the first time.

Thanks for reading the Retro TV Review,  I look forward to discussing the rest of the series with you, one episode at a time every Monday, Wednesday and Friday!  Next Review: The Wounded