The 25th anniversary of Star Trek is celebrated by the appearance of one of the most iconic characters in Star Trek history.  Find out who on the episode that originally aired on November 4, 1991,  Unification I.

The Enterprise is pulled from a mission by Starfleet to assist in discovering why the famous Vulcan Ambassador Spock may have defected to Romulus.

After revealing that they want Picard and crew to determine the reason Spock may have defected to the Romulan Empire,  Picard decides to pay a visit to his old friends Sarek and Perrin to see if he can learn more about Spock’s disappearance.

Arriving at Vulcan, he makes contact with Perrin and learns that Sarek is very ill as his Bendii Syndrome has progressed further.   Perrin indicates that Spock left on his own accord and that, before he left, Spock and Sarek had a public disagreement over the Federation-Cardassian War. She reveals that Sarek desperately wants to make amends with his son before his passing and Perrin fears he will not live long enough to do so.  Perrin allows Picard to visit Sarek,  but only because of the connection they share.

Picard talks with Sarek about Spock and, in a moment of lucidity, Sarek reveals that he may have met with Senator Pardek, a Senator Spock met at the Khitomer Conference decades prior.  Sarek refuses to believe that Spock defected and confesses that he is proud of his son.  Sarek asks Picard to take one last message to Spock, ‘Live Long and Prosper.’

Afterward, Picard and the Enterprise travel to Qo’noS to request a ship with cloaking technology from their ally Gowron.  It appears, however that Gowron has no interest in talking to them as he has been solidifying his claims as Chancellor by claiming that he alone was responsible for ending the Klingon Civil War.   As they wait for a response, Data discovers that it is indeed Parek in the photo with Spock that the Federation obtained. Meanwhile, Riker and LaForge manage to discover remains of a Vulcan deflector array mixed in with Ferengi wreckage.  Although a mystery, Riker asks to travel to the last location the deflector array was seen while Picard and Data leave for Romulus. Soon a Klingon ship arrives to pick up Picard and Data and the Enterprise leaves to find out more about the Vulcan ship wreckage that they are researching. 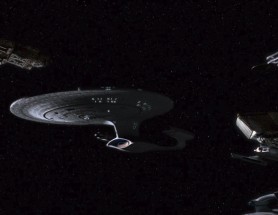 As Data and Picard travel to Romulus with a cantankerous Klingon Captain,  Riker and the Enterprise travel to a ship depot operated by the Zakdorn. They contact Klim Dokachin who is reluctant to assist.  Counselor Troi meets with Dokachin who agrees to work with them as he doesn’t see ‘handsome women’ very often.  They arrive at the coordinates of the ship he shows in his depot only to find that it is missing.  They soon find that another ship, the USS Tripoli is also missing and it appears that something is amiss.  Riker masks the Enterprise to appear as refuse and awaits the ship that they expect to arrive.  After a few hours a combat vessel arrives at the location where the USS Tripoli usually sits and awaits a supply transport.  Just as it arrives, the Enterprise powers up and attempts to contact the ship.  The Ship attacks and, when the Enterprise reatilates, the enemy ship explodes.

Picard learns that Sarek has died and, as he and Data prepare for their mission by disguising themselves as Romulans, Picard finds himself preoccupied by the news of Sarek’s passing. He explains that this changes the elements of their mission as it is now not only their duty to find Spock but also to relay the news of Sark’s passing to his son.  They beam down to Romulus to begin their mission. They find the location of where Spock was last seen and wait to see if Pardek arrives as expected.   Before long, Pardek makes an appearance and they make contact.  Soon local soldiers take notice and take both Data and Picard in custody.  They soon discover that they were taken off the streets by Pardek and none other than Spock himself. 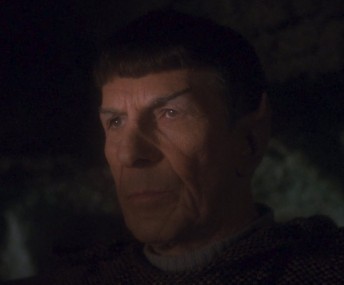 This episode plays out as a mystery.  Why would one of the most respected Vulcans in the Federation go to Romulus, the home of one of the Federations most bitter enemies?   Immediately it is suspected by Starfleet that Spock has defected, for some dark reason one of the heroes of Starfleet has turned traitor.  As a fan this was a devastating thought! Spock a traitor?  There is no way possible such a thing could occur!  Of course, for the entire episode we were left wondering just what Spock was doing on Romulus and were still left wondering when he showed up at the end of the episode.

Nothing was more exciting than the return of such an iconic character to a Star Trek television episode.  Not since the cameo of McCoy in the pilot had we seen any of the original series Enterprise crew and, if anyone were to still be alive, it would be Spock.

For Picard this was more of a personal mission that most, having had a mindmeld with Spock’s father, Sarek, Picard has a deeper connection to Spock than anyone.  For fans, it only makes sense for Picard to want to find and meet Spock but for Picard, it is something he must do even with his orders to do so. This is a personal mission and it is going to be infinitely more difficult because of it.

This marks the first time Leonard Nimoy appears on Star Trek the Next Generation and was timed to be part of of Star Trek’s 25th Anniversary celebration.

This episode also marks the last time we will see Sarek as played by the original actor Mark Lenard and also marks the first time a major character from The Original Series has died.

Picard mentions again that he had only met Spock once before.  This is in reference to his conversation in the episode Sarek where he indicates that he met Sarek once before at ‘his son’s wedding’.   Spock’s wife or even if it was Spock’s wedding has never been revealed.

This episode marks the first time a Federation ship has traveled to Romulus and it is also the first time that we see Romulus not as a holographic recreation.

Thanks for reading the Retro TV Review,  I look forward to discussing the rest of the series with you, one episode at a time every Monday, Wednesday and Friday!  Next Review: Unification II