Now that Voyager is firmly lost in the Delta Quadrant, it’s time to get into the strange and wonderful adventure in this new unexplored part of the galaxy, right?!   Nope, we need some interpersonal conflict among the new crew first and who is best at that than our resident half-Klingon, B’Elanna Torres?   Originally airing on January 23, 1995, this is Parallax.

Voyager answers a distress call only to discover…itself?  Meanwhile B’Elanna makes friends with the engineering staff…well sort of.

We start the story off with a typical Klingon interaction, punching a coworker.  We find the Doctor treating Lt Carey undergoing treatment after his encounter with her. It seems there has been some kerfuffle in engineering about how to do things and the two didn’t quite agree.  As Chakotay and Tuvok head off to handle the issue, Tuvok makes it clear he wants her ‘taken care of’ but Chakotay has other ideas and wants to handle the situation himself, much to Tuvok’s dismay. Chakotay soon encounters some of his former crew who make it clear that they are ready to follow the Commander into a mutiny if he gives the word. Chakotay finally arrives at B’Elanna’s quarters and informs her that she has to make amends with Lt Carey as he plans to put her over Engineering as it’s Chief. Regardless, It is clear that this Federation/Maquis combined crew is off to a rocky start.

During the Senior Staff meeting, it soon becomes obvious that the ship is in no condition to make a 70 year journey.  After Neelix and Kes interrupt, much to Janeway’s dismay, but is seems they have some good ideas including a hydroponics bay.  Possibly solving the food issue, Chakotay recommends B’Elanna for the position of Chief Engineer but only gets static as Janeway quickly moves on to discuss the absence of a Chief Medical Officer.  Tom Paris is volun-told to join the EMH and begin training as the new Doctor when suddenly, the ship begins shaking.  Rushing to the bridge, they soon receive a distress call from an unknown ship that seems to be stuck in the event horizon of a singularity.  Chakotay contacts B’Elanna to work on the issue from Engineering but is quickly overwritten by the Captain who promptly pulls him into her office.

Janeway makes it abundantly clear that Chakotay and his crew are not welcome as senior crewman and chastises her Second Officer for ‘overstepping his bounds’.  He informs his new Captain that she is using him as a ‘token’ Maquis and that ‘his people’ will never get a chance to grow if she refuses to let them do what they do best.  It seems the blended crew is going to be a bigger challenge than either of them thought.

In Sick Bay, Kes begins working on her hydroponic idea.  Requesting soil samples she gets static from the Holographic Man indicating that he is not happy with having to treat everyone’s random illnesses as his program could do so much more.  Kes soon points out that he appears to be shrinking and the Doctor confirms it, it seems the imaging processors are malfunctioning.  Requesting help he is quickly dismissed as there are more important things to do.  Kes then asks for the Doctors name and discovers he has yet to be given one.

Back on the bridge, Janeway attempts to tractor the ship in the singularity but only manages to pull Voyager closer to the event horizon.  It seems they will need help getting the ship out and they head off to a nearby star system suggested by Neelix.

Janeway reaches out to discuss B’Elanna’s place on the ship and learns that her potential Chief Engineer is not happy with her lot in life.  Janeway needs to make a decision soon and she is unsure if this half-Klingon is right for the job.  After B’Elanna leaves The EMH contacts her about his height issue and informs her that there are several crewman exhibiting illness. Soon, they discover that they have encountered the singularity again. It seems that, even though they headed out and away from the singularity, they never left it.  Janeway attempts another retreat from the singularity only to find them back where they started within moments. Something strange is going on and they need to find out what. Chakotay insists that B’Elanna attend the staff meeting much to Janeway’s dismay. At this request, In Engineering, Lt Carey makes it clear he does not like B’Elanna.

After the Doctor reports his findings, and showing that he is still shrinking, the Senior staff begin discussing options.  B’Elanna chimes in and, of course, comes up with a solution to contact the other ship.  It seems that B’Elanna is pretty good at her job after all.  Putting her plan into motion, the crew make a discovery that shocks everyone, the sos is coming…from themselves. DUN DUN DUUUUN!

In fact, the other ship is also The USS Voyager! B’Elanna explains that she believes that their Voyager is in fact trapped in the singularity and not the other way around. If they don’t react soon and escape the singularity, the ship will be crushed. As Janeway and B’Elanna discuss the situation it becomes clear that they have a rapport that neither saw prior causing them to develop a solid plan to help them escape.  Soon, The Captain and B’Elanna board a shuttlecraft together and head out to create an escape for the ship. 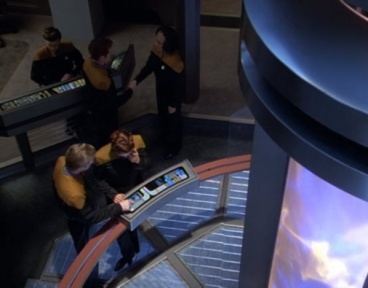 To make a long story short, they manage to not only get the ship out of the Singularity through convenient sciency stuff (or this would have been a VERY short series) but Janeway and B’Elanna also manage to find something to connect on, i.e. they went through some shit together.  Seeing that she has great potential, Janeway assigns B’Elanna as the Chief of Engineering helping to close the rift between the two crews and between Janeway and Chakotay.

The purpose of this first post-pilot episode is simple, to begin filling in the crew and show that the two crews, The Maquis and the Federation officers, are going to have some time to adjust to their new environment.

To assume that the two very different crew members would magically meld into a perfectly functional family is a stretch even for a series like Star Trek.  Sure they all come from this magical Utopian future but keep in mind, the Maquis were a group that were former Federation citizens who were practically given up on by the Federation to broker a treaty with the Cardassians.  Needless to say, these people really don’t care for the Federation and there is a good chance that some of them are just criminals who joined because they like to fight.  We get a glimpse of this animosity not in B’Elanna but in fact in the brief interaction between Chakotay and Seska.  While Seska has some secrets that even Chakotay doesn’t know about yet, she makes it clear that she and her fellow Maquis members are ready to rise up and take the ship if the word is given.  To Chakotay’s credit, he quickly squashes this idea…or does he…and does his best to integrate his own Chief Engineer into the crew, one B’Elanna Torres.

While we learn little about the half-Klingon woman’s past, B’Elanna Torres makes it clear that she is very different that most Chief Engineer’s we have seen in the past. She is a no nonsense task oriented player who, unlike the previous Engineers we have met, has no time for talk as she comes from a ship where things needed to be done right away and without question.  This, of course, ruffles some feathers…or some noses, and we see her first altercation go very poorly.  All that aside, she gets the job done and frankly gets the job making for some interesting story telling to come.

One thing I really liked about this episode is the subtext that is built on in later episodes.  From Neelix’s jealousy issues to Kes’ child/parent relationship with the EMH Doctor.  It’s all there if you know where to look.  We even get the rather uncomfortable over-explaining (Talax-Splaining?) that Neelix tends to do to Kes which, on hindsight, is really annoying to be honest. I mean, in this episode she did ask what a singularity was but then he HAD to go into a tale about his adventures and…yadda yadda. Oh Neelix, why man? Why?!  All that being said there are a ton of well placed hints that I am sure the writers placed just to have some things to build one.  Then again, maybe they didn’t plan them and picked up on them later, either way, it really gives the series a sense of progression implying that they are indeed working toward something larger than themselves.  We even get a tiny hint of Neelix and his cooking obsession…more on that soon enough.

All in all, not a bad first outing post lost-at-sea but not at all what I was expecting their first adventure to be.  I mean, we are in a new part of the galaxy right?!  Where are the strange new worlds and new civilizations?  Don’t worry, we don’t have to wait to long for some of that, this is just the start, trust me.

When I first saw the title to this one my brain immediately jumped to the DCU and screamed, ‘OH MY GOD HAL JORDAN!, then I remembered that this was Star Trek so no…not the Parallax I was expecting… oh well maybe we will get some kind of awesome space villian instead….uhm…no…not even that.

Thanks for reading the Retro TV Review,  I look forward to discussing the rest of the series with you, one episode at a time every Monday, Wednesday and Friday!  Next Review: Time and Again