It is a case of alternate Voyagers, doppelgangers and Vidiian nightmares in the episode that originally aired on  March 18, 1996.  This is Deadlock.

Voyager encounter’s itself and Janeway must determine who should survive when the Vidiians attack. 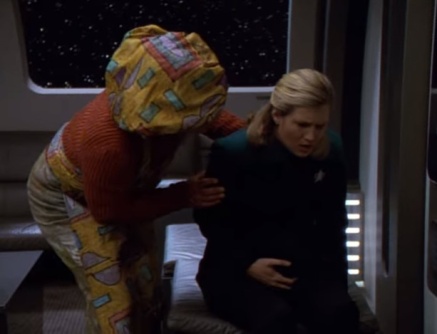 After asking Ensign Wildman for help in the kitchen, Neelix is shocked when the Ensign goes into labor. As Wildman undergoes a dangerous labor causing the Doctor to beam the baby out, Voyager finds itself approaching Vidiian space and must find a way around the upcoming threat.  Soon however the ship undergoes a strange power fluctuation after encountering a subspace drift damaging the engines and rendering the ship open for Vidiian attack.

Now facing a large amount of wounded, the Doctor is forced to attempt to save Wildman’s baby while dealing with the ship’s casualties.  The damage continues as proton bursts continue to weaken the structural integrity of the hull.  Things get worse when Ensign Wildman’s newborn child dies and Harry Kim is killed after being blown out into space via a hull breach. Things get stranger when Kes vanishes into a spacial rift moments later.

Investigating the spacial rift  Torres determines that there is an oxygen rich environment on the other side but the investigation is cut short when the hull begins to depolarize causing the ship begin to break apart.  Just as the ship begins tearing itself apart Janeway sees a phantom of herself and Chakotay on the destroyed bridge.

Janeway, in her Captain’s chair on the bridge, sees a distraught version of herself leave the bridge in a hurry. Concerned as to what it means she contacts B’Elanna to determine how the proton burst procedure is going.  It seems they may be unknowingly responsible for the damage of the other Voyager..

In sickbay, Wildman welcomes her new child to the ship much to everyone’s pleasure.  Janeway asks about another guest who happens to be a duplicate of Kes herself. KesA awakes and tells JanewayB of the attack and subsequent damage. JanewayB begins investigating the events trying to determine how each ship could have such a vastly different experience although having a nearly identical history.  JanewayB orders the end of the proton bursts and begins scanning for the second Voyager.  They soon determine that the Voyager was duplicated when they went through the subspace divergence field.  It seems that both ships are drawing power from the same antimatter supply and they must work together to survive this event. 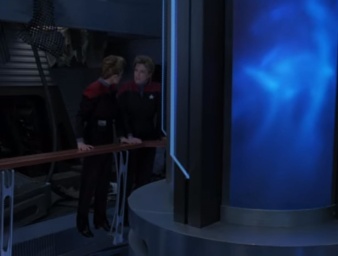 KesA awakes in sickbay dealing with the memory of Wildman’s child dying while also trying to accept that this did not occur on this Voyager. In Engineering JanewayB works with B’ElannaB to contact the other VoyagerA.  In VoyagerA the signal JanewayB sends is received by JanewayA and they begin to communicate.  After explaining the situation the crew of VoyagerA agrees to work with VoyagerB in order to survive.   Unfortunately their plan fails threatening both ships only for VA to discover that their plasma leak is getting worse.  JanewayB and KesA go to VA to meet with their crew and help them determine a plan of attack.  Working with one another Janeways A and B they determine that there is little that they can do to fix the situation save destroying one of the ships.

Both ships soon find themselves facing Vidiians but VB does not have weapons and VA does not have shields.  The Vidiians attack causing VB to lose communications with VA and allowing the Vidiians to capture VB.   Invading the ship the Vidiians begin killing the crew and harvesting organs as they move through.   Although VA is heavily damaged there is no chance of saving VB.It is soon clear that VB is not going to survive this attack and Janeway B makes the only choice they have, set the ship for self destruct and save Harry B and Ensign WildmanB’s child by sending them to VA.

Although damaged, VB manages to escape the Vidiians undetected after VA is destroyed. Now Harry Kim B and Baby Wildman B find themselves aboard a familiar yet different Voyager.

As a stand alone episode this one is pretty solid.  Not only do we get a genuinely interesting story of two voyagers but we get a chance to see the Vidiians make good on their threat and effectively kill off the entire crew one by one.  The fact that the Vidiians were able to wipe out Voyager’s crew so effectively really shows us just how lucky Voyager has been in it’s regular encounters with the space ghouls.

That aside this episode sets up some pretty interesting events that, while not really followed up on in later series.  Ensign Harry Kim and the yet named Naomi Wildman are not the ‘original’ versions of themselves. In fact, they are alternate versions from an entirely different timeline.  While there is a throwaway moment at the end where Kim brings this up, the concept is literally ignored in the proceeding episodes making it really a lost opportunity.  They could have honestly had fun with this one with Kim having slightly separate memories or having him do things just a little differently.  Imagine Paris asking him to play the Clarinet and KimB having no clue as to how to play it giving us some fun moments.  Now, thinking about Naomi, had they been clever they would have made the baby that died a female and the one that survived a male.  This would have played into Ensign Wildman’s statement ‘I thought I would have a boy’ a little more poignant indicating that she might have picked up on alternate Voyager’s wavelength at some point. 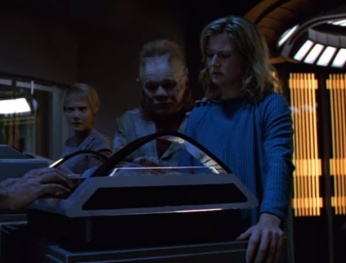 All that aside, you have to give it up for Ensign Wildman. She witnesses her child die as the result of an accidental attack from another Voyager then an alternate Harry Kim shows up with a perfectly healthy version of the child she just lost.  Now most people’s minds would break in this event but not Wildman. In fact, she not only accepts the situation, she doesn’t even bat an eye that the body of her actual child is laying in the morgue on the ship as she holds an alternate version of that same child.  I mean, damn that is either some serious denial or she is the toughest Ensign in all of Star Fleet.  I vote the later.  Ensign Wildman is a bad ass through and through.  Speaking of which…did they just leave the real Ensign Harry Kim’s body floating in space…damn Janeway that is stone cold.

That being said, I loved the action and pacing of this episode through and through.  The interaction between the two Janeways, the bait and switch as to which Voyager is going to be destroyed, and the incredible Vidiian attack were done exceedingly well making this a pretty solid entry for season B.  Interestingly Voyager at the end is heavily damaged with the ship being operated out of Engineering, but somehow it is fully repaired and working well in the next. Not sure how they managed to fix the ship that fast but bravo for the effort.  Maybe the new Harry Kim is an engineering wizard?  Shame he still never get’s promoted. 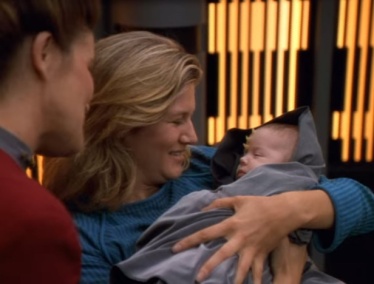 Thanks for reading the Retro TV Review,  I look forward to discussing the rest of the series with you, one episode at a time every Monday, Wednesday and Friday!  Next Review: Innocence