Janeway faces a moral dilemma when a new being is made from two of her crew-members. Originally broadcast on May 6, 1996 this is Tuvix.

Janeway must make a difficult decision when Tuvok and Neelix are blended together creating a unique and new person known as Tuvix. Should she allow Tuvix to live or restore the lives of her lost crew-members? 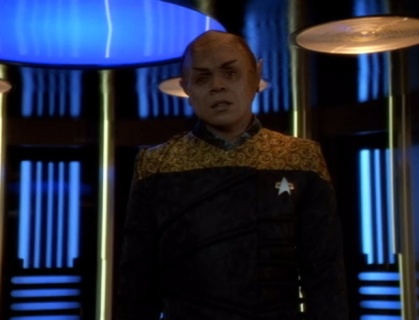 After collecting plant samples from a nearby planet, Tuvok and Neelix return to the ship via the transporters only to find themselves beamed back aboard as one person portraying traits of both the Vulcan Security Officer and the ship’s Moral Officer.

Shocked at the appearance of this new alien, Kim demands to know who he is resulting in this unidentified alien to reveal that he is indeed a blend of both Neelix and Tuvok. Confirming with the Doctor it seems that the two crewmen, as well as the very orchids they collected, have been blended in to a new person via a transported accident. 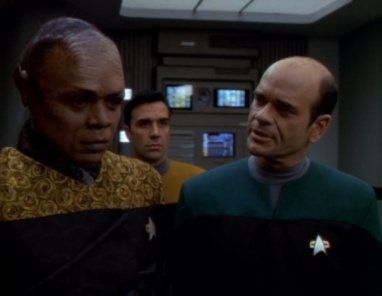 Although it is clear that this new being, now calling himself Tuvix, has the memories and personality traits of the two crewmen, the crew have a difficult time accepting this new life-form as one of their own. Kes is distraught at the thought of her lover and teacher being in one body, while Janeway stresses at the loss of both her tactical officer and that of their guide. Tuvix assures them that he is both people in one and, despite their misgivings, is allowed to go to work on the ship both as the tactical officer and chef. Although it seems Tuvix is doing a solid job at both positions, The Doctor assures everyone that he will diligently work on a solution that will restore both crewman to their natural states.

After a few weeks the crew begins to acclimate to the existence of this new crew-member but Kes and Janeway still have reservations as they both lament the loss of their friends. Soon, however, The Doctor announces that he has finally found a way to reverse the accident much to the delight of the crew, with the exception of one person, Tuvix himself. Soon Janeway is put in an awkward situation wanting her crew-members back but also facing murdering an entirely new person who combines both of her people.

After much debate, Janeway decides that Tuvix must give up his life to save the other two, but finds that The Doctor is unwilling to complete the process as this will cause harm which is against his oath as a physician. Janeway finds herself forced to complete the procedure restoring her friends and taking on the guilt and responsibility onto herself. The procedure is successful with Tuvok and being returned to the crew leaving some mixed emotions among the crew, especially Janeway.

I don’t know how to feel about this episode and that in and of itself shows us just how powerful it is. The thing I love about Star Trek is that, every so often, this franchise forces it’s viewers to confront difficult and often polarizing ideas.

In this episode we are faced with the dilemma of the rights of an individual vs those of others, however it is complicated further when all of those individuals live in a single body. Although we have been taught that the needs of the many outweigh the needs of the one, to outright kill one person to save two is not an easy thing to decide. Although created via a transporter accident, Tuvix soon became a person in his own right despite the fact that he was made of two completely separate beings. While Janeway argues that the families and friends of the separate people should be considered in this decision, this seems to be a conflict of interest when it comes to personal rights. Do the families wishes, even unspoken, deserve to weigh in on a decision to save lives or end them? When do personal rights and feelings come into play, and who has the right to decide who live and who dies.

This is not something even I can answer and, although I feel that Janeway was in the wrong to kill Tuvix, there are some fine arguments for what she did. Was Janeway heartless in her actions toward Tuvix, possibly, but then again, this is something that a Captain has to face from time to time. What they do in those moments define them from that day forward.

Actor Tom Wright, who we will see again under heavy makeup in Enterprise, did an incredible job playing the amalgamation of Neelix and Tuvok. To see this incredible blend of these two characters in an wholly original being played by an entirely different actor was nothing short of fantastic. Wright is one who is able to really make you feel for his characters as he pulls from the other cast members and the history they have with one another. In all honesty, while I would have missed Tim Russ and Ethan Philips, I wish Tuvix had lasted more than a single episode. Had this been the cliff hanger or even two or three episodes into season 3, the pain of his departure would have been so much more. Regardless, Wright did a bang-up job portraying Tuvix. Hopefully there is an alternate universe out there where Tuvix lives.

The one fault in this episode is that it had little to no legacy concerning Tuvix and his impact on the crew, specifically that of Neelix and Tuvok. It was revealed that Tuvix retained the memories of both men, so it goes without saying that both men should have retained the memories of Tuvix. Imagine remembering the fear and anger at being asked to die but also dealing with the excitement of being back as yourself. Not only that but many of the personality traits of each character could have blended into one another, as I doubt that a transporter fix could have completely separated their feelings and experiences as well. This could have easily allowed for some very interesting and fun character development for the remainder of the season. Imagine how each of them might feel and react now knowing more about one another than ever before. There was so much potential here that was, ultimately, wasted treating this entry as little more than a monster of the week episode.

Thanks for reading the Retro TV Review, I look forward to discussing the rest of the series with you, one episode at a time every Monday, Wednesday and Friday! Next Review: Resolutions
If you would like to read more reviews I have a weekly series called Key Movies Of My Life that comes out every Thursday and for more retro TV goodness check out the rest of the Retro TV Reviews here.