More action, adventure and a convenient plot twist in the episode that originally aired on October 18,1993.  This is Gambit Part II.

Picard and Riker are trapped aboard the Mercenary Ship run by Baran as the pirates continue searching for rather specific Romulan artifacts.

…and now the conclusion.

The Enterprise is under fire and is taking direct hits.  Worf notices that there is no damage to the ship despite the attack and decide to play along.  Once it appears that they have won, Baran and his crew escape from the the Federation ship.  Galen (Picard) continues to antagonize Riker, hoping to ally the two of them.

As Galen is scanning artifacts he discovers one of the pieces that Baran is searching for.  Baran confides in Riker that they only need one more artifact and he can dispose of Galen.  Baran informs Riker that he wants the Commander to work with Galen to start a mutiny.  Baran wants to determine who of the crew is faithful to him and, when the time comes, he wants Riker to be the one to kill Galen.  After discussing the matter with Picard, Riker and Picard begin to plot their plan of attack.

Galen is confronted by Tallera, the Romulan on board the ship, and she reveals that she is actually T’Paal, a member of the Vulcan Intelligence and is there to stop Baran from finding something called the Stone of Gol. This is a device that would allow Vulcans to focus and amplify their telepathic energy and kill with a single thought.   She plans to stop them no matter the cost and she begins working with Picard to prevent the discovery of this item. 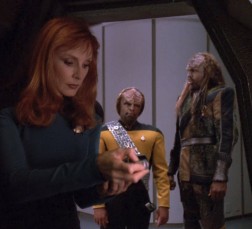 Meanwhile, The Enterprise encounters a Klingon vessel who is less than helpful.  The captain, Koral, refuses to cooperate and, after discussing the matter, Worf suggests conducting a Health and Safety inspection of the Klingon’s shuttle in order to determine why he is there.   Baran gets the news and decides that they need to board the Enterprise and raid the ship for the last artifact.   Baran instructs Riker to take Galen with him and kill Galen once the artifact is found.

As Crusher and Worf discuss the inspection, Galen, Riker and his team beam aboard the Enterprise to take the artifact.  Just as Galen finds the artifact, Riker attacks and Galen stuns him faking Rikers death.  Riker gets left behind as Galen and the team return to Barans ship. Upon returning, Galen challenges Baran for command of the ship and gets the crew on his side.  Baran attempts to kill Galen with his pain device and ends up killing himself by accident.  (Galen/Picard switched transponders or some such, a little Deus Ex anyone?).

With Riker back in command of the Enterprise, he contacts the Vulcan high command and lets them know that the Raider ship is on it’s way to Vulcan.  Riker learns that the Vulcans have no operative aboard the ship and Tallera is not who she appears to be. 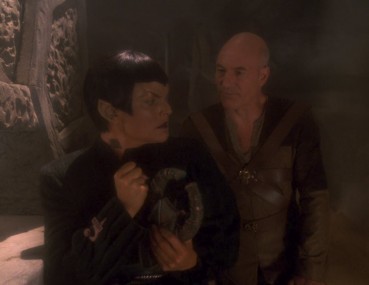 Galen shows Tallera the artifact and questions the pieces on the device.  There is something that does not add up for him and he informs Tallera of his findings.   Upon telling Tallera of his instructions for Riker to contact Vulcan High Command, she becomes a little flustered in the revelation.  It is clear that he doesn’t trust Tallera and has done something to prevent the Vulcan spy from completing her true mission.  As Tallera plans to beam down to the Vulcan surface, she exposes Galen to the crew as Picard. Picard informs the crew that Tallera isn’t planning to pay anyone and that she is trying to build a weapon.  They all beam down to the surface and, just as they find the device, Tallera begins to attack the rest of them with the new weapon.   She kills two of  marauders and threatens Picard.  The Enterprise crew arrives but Picard warns them that the device cannot hurt them if they remain peaceful.

It seems that this ultimate killing machine can be defeated by peace and so all of the Enterprise away team are safe. They return to the ship and continue on their way, but not before Data takes Riker to the brig for his multiple counts of court-martial-able offenses.

Well…that was rather unexpected.  An ancient Vulcan weapon of ultimate destruction that can be overcome simply by being peaceful.  Ugh…yeah I think the writers wrote themselves into a corner with this one.

Overall it was a fun episode that started off on an adventure and played out fairly well. Unfortunately, instead of getting a really awesome payoff that sparked a massive story that enveloped the entire final season, we get the happy thoughts will save you device.  I mean, it could be worse, right?    Right?

There is a great bit between Data and Worf where the Klingon Officer questions Data’s orders in front of the rest of the crew.  Data corrects him in private and informs him that, if Worf wishes to remain his acting First Office he will not question the Android commander in front of the crew again.  It was a rather odd moment, but one that worked as a minor subplot.

We learn that Vulcan was one of the founding words of the Federation, something that would be explored further in the series Enterprise.

Data clearly doesn’t get humor as when Picard jokingly mentions that Riker should be escorted to the Brig, Data complies without hesitation.  Boy he has a lot to learn…

Thanks for reading the Retro TV Review,  I look forward to discussing the rest of the series with you, one episode at a time every Monday, Wednesday and Friday!  Next Review: Phantasms