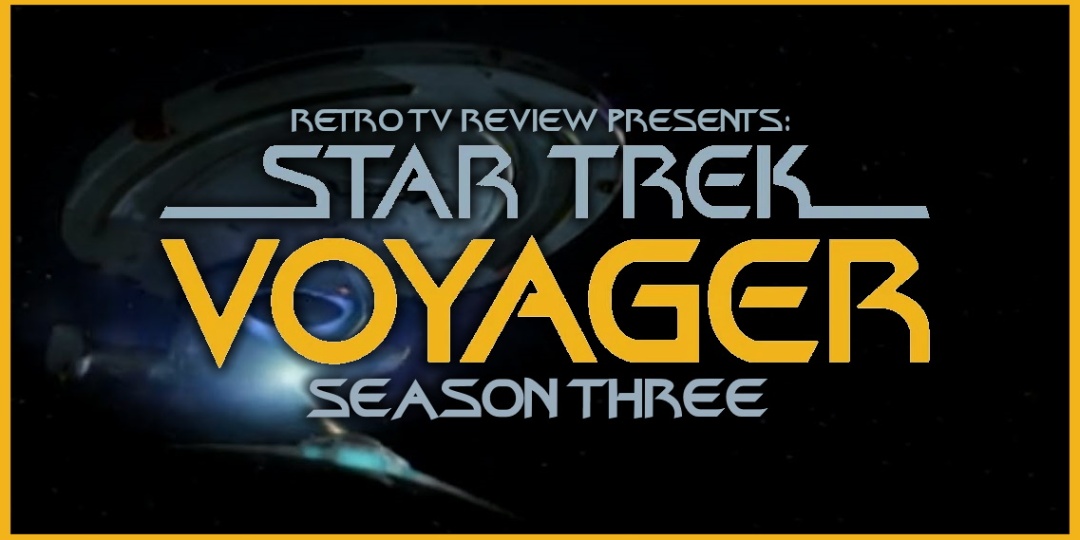 The Doctor’s quest for identity goes awry while Kes pursues a new romantic interest.  Originally broadcast on February 19, 1997 this is Darkling.

Having left the Nekrit Expanse, Voyager finds an outpost of Mikal Travelers who might be willing to share information of what is ahead.  Things take an interesting turn when The Doctor tampers with his matrix and Kes falls for one of the Mikal Travelers.

As Janeway and Kes find themselves being entertained with tales of travel by the Mikal Travelers and a man named Zahir, The Doctor begins working on a way to enhance his programming using the personalities or Gandi and Lord Byron.  Discussing the matter with Neelix, the two are interrupted by Kes who, much to the Doctor’s annoyance, has been distracted by a certain Mikal Traveler on the planet.  Neelix is clearly unhappy with Kes’ interest in other people and The Doctor suggests to Kes that she might want to take a cold bath before going much further with Zahir. 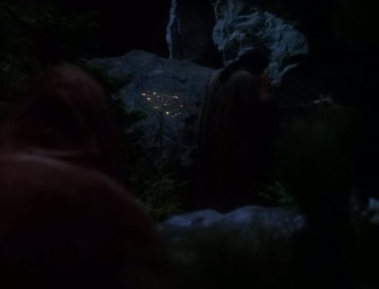 The next day Torres finds herself in sickbay with a stomach ache due to an alien salad, and notices that the Doctor is acting…oddly.  Discovering his recent alterations, she suggests that he be careful as personalities tend to blend in interesting, if not undesirable ways.  Promising to help work on his program she heads off as the Doctor deactivates himself.

Back on the planet, Kes and Zahir are clearly interested in one another sharing a kiss as they explore the nearby woods.  However, it seems someone is watching them.

On the ship it is clear that Kes is distracted by her new infatuation and, when the Doctor points out that she is not focusing on her duties, she becomes upset.  Claiming that everyone on the ship is treating her like a child, she wants to be allowed to make her own choices.  Knowing that the Doctor cares for her but wanting to do her own thing, she soon asks Janeway for an extended leave to spend time with Zahir.  Considering her request, Janeway asks Kes to let her think about it.

After working with Tuvok on Voyager’s upcoming route, Zahir returns to the planet only to run afoul of the cloaked man from earlier.  Revealing himself to be The Doctor, the cloaked man pushed Zahir off of a cliff and then demands safe passage from the planet from Nakahn, another Mikal Traveler who encountered the crew earlier.

Back on Voyager, everything seems normal as Kes encounters The Doctor in sickbay. Informing him  that Zahir has been hurt and needs medical attention, The Doctor seems more than interested in helping.  Just before beaming to the surface, Torres stops The Doctor as she has found something severely wrong with his program. It seems that his tampering has created a disturbing personality flaws making his program unstable. 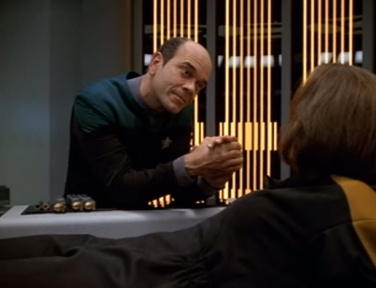 After finding a lack of evidence in the attack, Tuvok visits the Doctor to get his opinion.  There they find Torres unconscious but, when activating The Doctor, he indicates she has succumbed to prophylactic shock due to a salad she had consumed. Putting her under observation, Tuvok and Janeway leave only for the Doctor to show that he is the “other” version and, using a hypo-spray, he awakens Torres demanding, at the threat of her death, that she tell him how to delete the Doctor from his personality.

Kes soon finds the Doctor on the holodeck finding him surrounded by parts of other holograms.  Introducing himself as the new EMH, he takes Kes hostage while instituting a dispersion pattern so Voyager can’t find them.

Tuvok informs Janeway that he has found holographic residue at the crime scene and is concerned that The Doctor was involved.  Investigating, they find that The Doctor has kidnapped Kes and they head to the planet to help save her.

After The Doctor and Kes struggle with his identity, the new program seems to be the victor and they soon encounter Tuvok.  Threatening Kes’ life The Doctor Leaps from a cliff with Kes’ in his arms only for Voyager to catch them mid-air with the transporters.  Back on Voyager Torres has fixed The Doctor’s programming making him realize the error of his ways.

In a nut shell Kes wants to explore other relationships and The Doctor is foolhardy with his program… so…nothing really new here.  Seriously I am not sure why I even went through the time to describe this episode as it is just so…well… 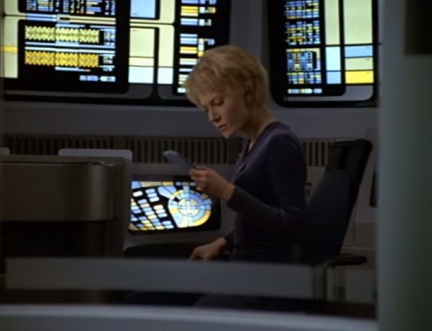 On the surface the stories have potential, The Doctor mistakenly injects a Dark Thread into himself causing some unforeseen and quite evil personality traits and Kes explores her romantic desires.   While the former could have really been a solid story of it’s own, it is the latter that makes this episode rather droll.  Sure, we all know that, at some point, Kes and Neelix broke up, but the personality shift in Kes seems rather extreme.  Maybe it is due to her experience being possessed by a despot, but to just want to leave to ‘spend time’ with some random guy seems more like a teenager thing to do than for the Kes we have come to know to do.  It is a strange and rather unfounded change, one that, unfortunately is never really ‘fully’ explained as Kes’ character…well let’s just say she doesn’t last much longer.  That being said, notice the strange outfits Kes wears in this one going from her casual looks to more of the single piece jump suits.  It’s almost as if the producers were trying to make this rather interesting character more of a ‘sex symbol’…hmmm. 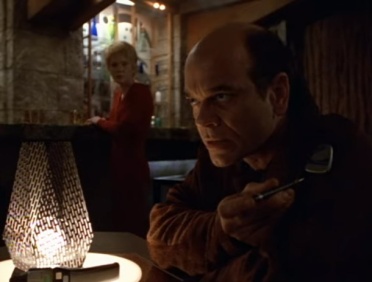 The Doctor’s story is a rather good one despite the rather weak story it is a part of.  If anything it, once again, showcases the immense talent that is Robert Picardo.  The man has some serious range and doesn’t get an opportunity to really explore that range very often as the EMH, but when he does…WOW.  Performance aside, We get a hint of the Doctor’s progressing feelings for his companion, Kes.  It has been well established that The Doctor has the capacity for feelings and it is not surprising that he has found feelings for Kes herself.  Now that Neelix is out of the way…well why not right?

Overall, this is not an overtly bad episode as it is just a rather weak one.  Not much comes out of this plot wise and can be boiled down to being just filler.

Thanks for reading the Retro TV Review,  I look forward to discussing the rest of the series with you, one episode at a time every Monday, Wednesday and Friday!  Next Review: Rise