Neelix begins to question his life after facing death. Originally broadcast on December 17, 1997 this is Mortal Coil.

Neelix dies during an away mission only to be revived using Borg technology. The Talaxian soon begins to question his very existence. 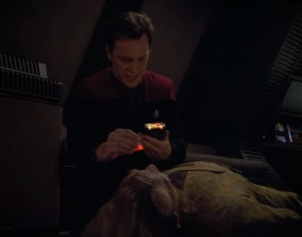 Neelix is chosen to accompany Paris and Chakotay for a routine survey mission, however, as the team begin beaming protomatter onto the shuttle, an energy beam hits Neelix, killing him.

Although Paris does everything he can to save his friend, it is clear that Neelix is brain dead. Rushing back to the ship this is confirmed by the Doctor who informs them that there is nothing they can do.  Soon Seven of Nine arrives and suggests the use of her Borg nanoprobes to save Neelix.  After a brief debate, Janeway orders it done and soon Neelix awakens confused as to how her got to sickbay. 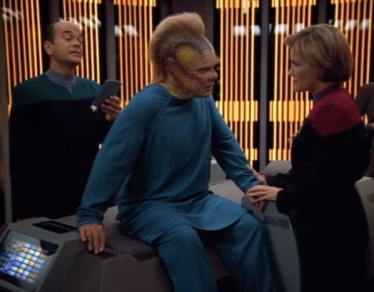 Janeway fills Neelix in with what has transpired and, while he is shocked and a little dismayed at the idea of having Borg Nanoprobes in his system, he seems grateful for the resurrection.  Janeway, realizing that her crew-member might need a distraction, reluctantly agrees to allow him to continue preparations for the Talaxian festival of Prixin.  Although Neelix seems normal to the others, it is soon clear that he is confused when he begins to wonder why his family did not meet him in the Great Forest upon his death.

Investigating the matter, Chakotay and Neelix go to the holodeck to reenact the events leading to his death.  As Neelix watches a recreation of himself die, he admits to Chakotay that he experienced nothing, no afterlife, no great forest, nothing.  Chakotay tries to console the Talaxian Ambassador but it is clear that Neelix is having a crisis of faith, and now feels that his beliefs in the Great Forest were nothing fantasy.

During the Festival, it is clear that Neelix is not enjoying himself, despite his crew-mates take the opportunity to try to lift his spirits.  Neelix leaves early to tuck Ensign Wildman’s daughter, Naomi, into bed, having become a Godfather to the young girl, and is asked by her to tell the story of the Great Forest again.  He does so but struggles with it as he no longer has the faith he once did. 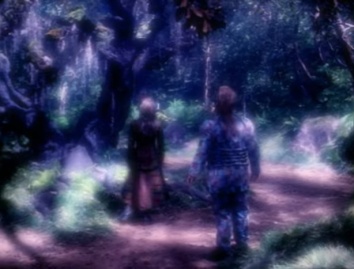 Back in the mess hall, Neelix confronts Seven about her actions in reviving him, telling her that she had no right in bringing him back to life.  Suddenly Neelix begins to show signs of his body dying again and rushes with Seven to sickbay.  There he learns that Neelix’s body was rejecting the Nanoprobes and and he will need additional treatment.  Knowing he needs more than just a physical treatment, the despondent Neelix asks Chakotay to help him take a vision quest. Unfortunately it seems that the answers he wanted are not in the vision quest as the vision of his sister tells him that the Great Forest was nothing but a lie meant to coddle the Talaxians who feared death.  Neelix’s visions get darker and he awakes knowing that he needs to die. 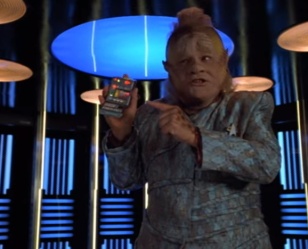 Neelix, determined to end his life, begins making his preparations to say goodbye.  After apologizing to Seven for his attitude toward her, he records his final farewells and begins to beam himself into the Nebula from one of the transporter rooms.   Harry Kim manages to prevent the first attempt but Neelix warns them that he will stop at nothing to do this.  Rushing to his aid, Chakotay finally learns what Neelix saw during his vision quest.  Having lost his own family, Chakotay tries to console the grieving Talaxian assuring him that the crew is his family now.  Neelix is not convinced until Ensign Wildman arrives in person wondering if he will still tell Naomi a bedtime story and help her daughter get to sleep.  Realizing that his life may still have a purpose even though he is still grieving for his loss of faith, Neelix relents and steps from the transporter pad to go tell Naomi about the Great Forest.

As I have said before, I always love when Star Trek discusses things that reflect our own world. Most of the time this franchise faces the big topics such as racism, sexual identity, even the question of sentiance, but sometimes an episode comes along that dives into a personal matter that every one of us faces at some time in our lives.  This is one of those episodes.

When the series first aired, I loved the character of Neelix.  He was a goofy alien who kept trying to please everyone despite the fact that he never really fit in and, I found a slight kinship in this Delta Quadrant Native.  So when he died at the start of this episode I was a little concerned.  Seeing that Kes had just left the series I was a little worried that he wouldn’t be very far behind.  While his death was not permanent, the story surrounding his death remains a very poignant one in the story of the Talaxian Ambassador.

What little background we have gathered about Neelix is that he has always felt that he was never good enough.  From his early days refusing to fight in a war, the loss of his family in the Metrion Cascade and even his days of a junk trader, Neelix has always been trying to prove to others and to himself that he is worthy.  Throughout this journey it seems that the one thing keeping Neelix from quitting was the concept of the Talaxian afterlife, ‘the Great Forest’.  With this concept threatened, well it seems that it is just too much to bear.  The only answer he can think of, ending it all.

Now, before you claim that Neelix’s suicidal feelings have come out of the blue, you have to stop and realize just how much this guy has gone through in the past year.  Not only is he having to deal with the the idea that his own afterlife is a myth, something that would have a profound affect on anyone’s psyche, but he has also had to accept the fact that he can not serve as Voyager’s guide any longer (something that nearly drove him away to begin with) and he has lost the love of his life with the departure of Kes.  While he has found a renewed purpose outside of being a guide, it is the departure of Kes that is still a fresh wound in his mind. For Neelix, Kes was not only his lover but also one of his final connections to his life prior to Voyager.  In a way, her leaving severed Neelix from his past, leaving him to rebuild as someone new, something that is never an easy task.   Still reeling from these losses, the final blow comes when he discovers that his own afterlife may indeed be a myth, his last hope to return to his family is now something that he can not count on and this is when his shields fail. 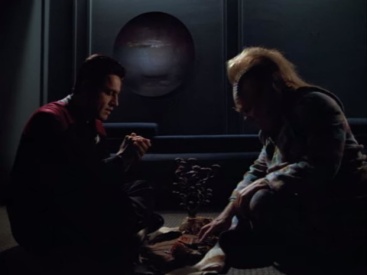 Hoping to find answers Neelix turns to the one other person he knows on the ship that holds spirituality in high esteem, Chakotay.  Unfortunately, the vision quest Neelix goes on does not provide him the answers he had hoped, or rather he does not interpret them in that way.  Something interesting happens here though, If you pay attention to the ceremony, Chakotay tells Neelix to think of a place he felt the most peaceful and content he has ever been and where does Neelix end up?  In the Mess Hall with his friends.  Sure, this is where he finds his sister who tells him that the afterlife is a sham and then he gets lost in the forest but the place he ends up first is telling for the character.  Neelix’s vision was not trying to tell him that it was time to die, to kill himself, it was trying to tell him that he needed to embrace his home on Voyager, the one place he has ever truly felt at peace, at home. Even when Neelix is planning to end his life, he does all he can to leave his friends in a better place, he cleans the mess hall, says his farewells and even leaves Tuvok a rather heartfelt message. All of this indicates that he still cares and really doesn’t want to die but his doubts have overwhelmed him to the point he believes he has no other options. Of course, he soon discovers that he not only has options, but he has a whole life on the ship waiting for him.

It is more than obvious that this episode tackles the very difficult and very real subject of depression and suicide but does so in a way that is both meaningful and vital to the character development on the series. Not only that but Actor Ethan Philips is given center stage and fully owns this episode through and through. In addition to taking on this difficult subject head on, this episode serves as a defining moment for the character of Neelix marking a moment where the Talaxian chef/merchant/guide/ambassador finally begins to come into his own.  I know I have given Neelix a hard time in my reviews but I love Ethan Philips as an actor and I have to say, even though Neelix is a little annoying at times I have to admit, I would miss him if he were gone.

On a serious note, if you or someone you know is considering suicide, please get help.  We all have tough times and it is okay to ask for assistance.  While it may not be easy, know that there are people who love and care for you.

If you don’t feel you have someone you can speak to please call: 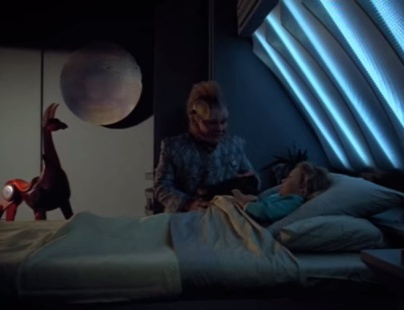 Thanks for reading the Retro TV Review,  I look forward to discussing the rest of the series with you, one episode at a time every Monday, Wednesday and Friday!  Next Review: Waking Moments