Doctor Crusher issues a medical treatment that causes the crew of the Enterprise to begin to de-evolve.  Desperate to save their lives (and her medical license) Crusher must find a solution before it is too late. 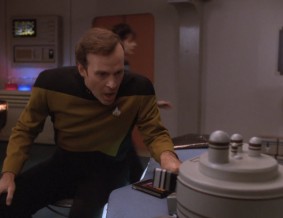 The Enterprise is performing field tests for their newly upgraded systems and weapons upgrades.  After one of the torpedoes goes rogue, Data and Picard leave the ship to pursue and destroy the torpedo.   Data leaves his pregnant cat, Spot, behind with Lt Barclay who has just received an injection to correct a dormant gene that has allowed him to catch Urodelan Flu.

Worf begins finding himself getting testy and, on a date with Troi, she begins to note how dry the ship is beginning to feel.  That night Worf finds himself having issues sleeping and builds…a nest…on the floor to get comfortable. 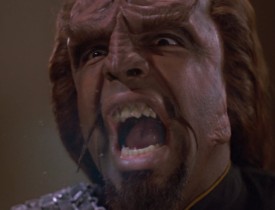 Later in Engineering, Barclay and LaForge review systems updates with Riker.   LaForge indicates that Barclay has been going full speed overnight and does not seem to be slowing down.   More and more crewman begin feeling odd throughout the ship, Riker begins to forget important events, LaForge discovers a strange hole in some deckplating and Troi begins to bath in her clothing.  Things get worse when Worf initiates a mating ritual by biting Troi on her cheek resulting in her reporting to sick bay.   Things get even weirder when Worf spray’s Doctor Crusher with venom! Soon, Nurse Ogawa fills Riker in with the details and it soon becomes clear that something is wrong with the ship and it’s crew. 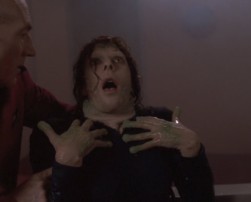 Captain Picard and Data complete their mission and head back to the Enterprise.  As they approach they discover that the ship is adrift and Data is unable to tell what has happened via sensor readings.   Data and Picard dock the shuttle only to find that something terrible has occurred on board the ship but it is unclear exactly what has happened.  As they explore the ship, they begin to hear sounds of animals and wild creatures throughout the corridors. Soon they find Counselor Troi’s quarters and discover that she has…changed.  Data discovers that Troi’s DNA has been altered but it is still unclear how.  They continue their exploration.

Upon reaching the bridge they discover one of the ensigns has been killed and soon find Riker has changed into a proto-human Caveman.  Data believes that the crew is de-evolving and discovers that some of the junk DNA in both Troi and Riker have become active via a synthetic T-cell.  Data informs Picard that it is likely that the Captain himself will de-evolve into a lemur or a pygmy marmoset.  To prevent any further degradation, Data begins searching for a cure.  He soon stumbles across Spots unchanged kittens and discovers that Spot herself has transformed into an iguana. wha…huh?

As they investigate further, Picard and Data find themselves in Engineering where Picard comes face to face with Lt Barclay half changed into a Spider creature. This shocks Picard and he begins to panic as his transformation begins to set in.

They soon report to Sick Bay and find Nurse Ogawa has transformed into a member of Planet of the Apes while Worf has become one of the creatures from Dark Crystal.  Creature Worf begins to attack, trying to get to Troi and Picard must find a way to distract him.  Picard leads Creature Worf down a corridor as the Captain sprays Troi’s pheromones around.  As Picard is being chased down, Data begins to use the amniotic fluid from Spot’s kittens and Nurse Ogawa’s unborn child to create a retrovirus.  He is successful and creates a way to use it to spread it around the ship via the air system.

It turns out it is all Crushers fault as the treatment she gave Barclay caused the crew to De-evolve.  She names the virus after Barclay and basically gives Troi a ton more work to do as Barclay’s councilor. 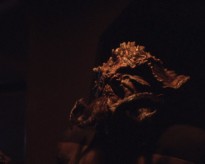 This is just a cool fun episode.  It really doesn’t do anything to move the story forward on a larger scale but it does give some insight into the evolution of the various species aboard the Enterprise, whether some of them make sense or not.

I do remember finding this one pretty unnerving as a kid but when I look back on it, it really wasn’t that scary. While it is a bit silly, it is still just a cool scifi story that could really have been made for any scifi series, or even horror series, on television.

This is the last time we see Barclay on the series until the film, Star Trek First Contact and later on Voyager.

We learn that Betazed’s evolved from amphibious beings, someone in Barclay’s ancestry was a spider…person and Worf became an evil crustacean.  so.  yeah.

This episode also marks the Directorial Debut of a Star Trek episode by Crusher herself, Gates McFadden. No wonder she got knocked out early on.

We never see nor hear from Spot’s kittens again.   No one knows what happened to them.  I think the lizard ate them.

Thanks for reading the Retro TV Review,  I look forward to discussing the rest of the series with you, one episode at a time every Monday, Wednesday and Friday!  Next Review: Journey’s End