It’s Nightmare on Voyager Street on the episode that was originally broadcast on January 14, 1998.  This is Waking Moments.

The crew of Voyager begin having nightmares that all involve visions of the same alien. 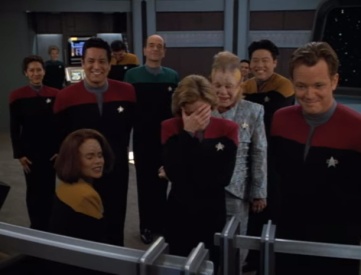 After many of the crew experience a series of nightmares involving naked Vulcans, dead crew members, crashing shuttles, and late night rendezvous with Seven of Nine, the members of Voyager wake up groggy and out of sorts.  There is one thing, however, all of their dreams involved an alien who somehow looked identical in each one.

The next morning it is soon revealed that everyone on the ship had strange dreams involving an alien and soon they discover that Ensign Kim is missing.  Rushing to his quarters they find the young Ensign unable to wake having gone into a hyper REM state.  With others being discovered in the same state, the Doctor suggests that the crew avoid sleep until he can determine how to revive Ensign Kim and Janeway begins to believe that the alien in their dreams may be at fault. 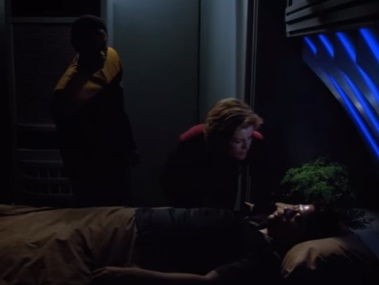 The senior staff begin trying to piece together what they learned from their dreams when Chakotay suggests making contact via their dreams.  Using a method known as lucid dreaming, something he happens to know how to do, Chakotay volunteers for the mission.  In order to protect himself he will use the visual cue of Earths Moon so that he knows he is dreaming, then he will wake himself by tapping the back of his hand three times.  Janeway and the Doctor agree to this attempt and the Commander goes under.

Chakotay awakens to find himself hunting deer in Voyagers corridors and soon realizes he is sleeping when he sees the moon outside a nearby window.  Not because he is carrying a spear hunting deer on Voyager mind you, because he sees the moon.  Anyhow, he soon finds the alien who informs Chakotay that they believe Voyager is out to kill their people and that they are merely protecting themselves as they are in a state of perpetual sleep.  Chakotay works out a deal with the alien to allow the crew of Voyager to sleep through their space and the crew will be awakened on the other side. The alien instruct Chakotay to take the ship to the border of their system not very far away.

Chakotay wakes himself and informs Janeway of their deal.  Janeway is saddened that this first contact will be short but understands.  Voyager sets course for the nearby system and the crew begin preparing for their sleep.   As soon as they reach the border, the crew awaken only to find themselves under attack by the very aliens who made the deal with Chakotay. 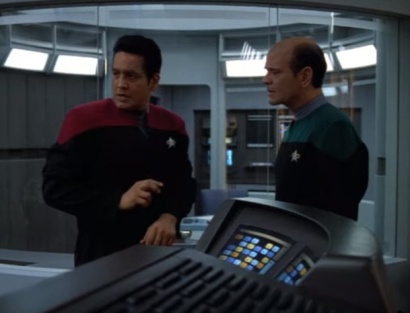 Surrounded and having been boarded by the aliens, the crew find themselves locked in the cargo bay.  As they begin to make their attempts to escape, Chakotay realizes that he is still asleep when he sees an image of Earths Moon in one of the control panels. Waking himself up just as he is being restrained by the aliens, Chakotay finds that he has been asleep for two days and that the rest of the crew have fallen into the coma like sleep. It seems that the entire crew is sharing the same dream, giving off a neurogenic field that is remarkably similar.  With only he and the Doctor awake, Chakotay uses the neurogenic field as a guide and begins to hunt for the sleeping aliens.

As Chakotay tries to find the aliens, Janeway and the rest of the crew struggle with knowing what is real and what is a dream.  Still experiencing the alien invasion that Chakotay has vanished from they soon discover that their world is a dream when the warp core breaches but the ship is not destroyed.

After several momentary dreams, Chakotay is awakened by The Doctor who gives the Commander a hypospray to take down to the alien planet so he does not fall asleep in his mission.  Beaming down he finds the entire population of the aliens in a sleep state.  Soon he orders the Doctor to launch photon torpedo at his location if he is not in contact with the ship in five minutes time. With that in place, Chakotay decides to use his stimulant to waken one of the aliens, informing them that Voyager will destroy everyone if they do not stop their dream attack.  They comply knowing that they can not win this war.

Back on the ship, the entire crew has been revived but are all now experiencing insomnia so they share breakfast in the mess hall with Neelix.

I normally do not like the ‘it was all a dream’ episodes.  They frustrate me especially if something major happens in that episode to one or more of the characters.  The fun thing about this one is that it takes the dream aspect to a different angle, one that is more akin to the films Dreamscape or even Nightmare on Elmstreet than your typical dream trope. 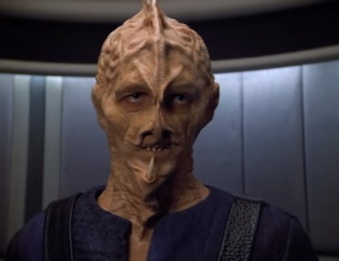 Voyager is all about exploration and the adventure in this journey so it is no surprise that the series would explore the dream-scape as a place of exploration.  Not much is known about why humans dream, what the actual purpose of this state is and how it affects us overall.  It is known that dreaming, or at least R.E.M. sleep, is necessary for our mood and overall sanity but outside of that much of dreaming is as vast as an unexplored frontier as the Delta Quadrant is.  So, for an episode dealing with dreams and an alien race that literally lives in the dream world, the opportunities were endless. This is where this episode fails, opening more questions than it was ever prepared to answer and never really closing the narrative although the crew manages to get well along their way in the end.

To me, this is a huge miss as this single episode serves as a really great start to what could have been a tremendous story. Heck, this could have been the logical two parter followup to the Year of Hell with Voyager navigating the dream world. While the concept of lucid dreaming or even using dreams as a weapon is not new, the idea of a species that is in a perpetual state of sleep, using dreams as a means of defense is fascinating, raising many questions. Since they have no need for physical attachments, how do they go about their lives in a dream world, are there limitations imposed on them or is their dream world a free-form that anyone can literally be anything?  It makes sense that they would want to protect their physical forms from being discovered but who takes care of their physical bodies while they  are asleep?  Are there a group of aliens who tend to them or do they simply no longer need to survive? Heck, how did this come to happen in the first place?  Unfortunately none of this is explored and this race, which are simply refereed to as ‘dream species aliens’ are soon forgotten about.

Honestly this seems to be a reoccurring problem with Voyager.  Each time we meet a new species that has potential to be a threat or to be something unique for the Star Trek Universe to explore, they all but forget about them after ‘moving on’ to a new part of space.  There is hardly ever any repercussions or even reference to these momentous events making even the most interesting story have little baring on the crew as a whole. Sure, this was a great and fun story, but without actual stakes…well the threat is rather a moot point. 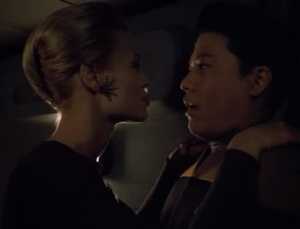 Thanks for reading the Retro TV Review,  I look forward to discussing the rest of the series with you, one episode at a time every Monday, Wednesday and Friday!  Next Review: Message In A Bottle