What would happen if you were suddenly unable to communicate with your friends and family in any way?  How would you figure out how to get across what you needed and how would you survive.  This is explored in the episode that originally aired on January 24, 1993.  This is Babel.

When Chief O’Brien gets tired of the Cardassian technology breaking down he makes an attempt to repair the offending components inadvertently infecting the crew with a virus that causes them to be unable to communicate.

Chief of Operations Miles O’Brien is having a bad day.  Everything is falling apart and it seems that everyone needs him at the exact same time.  We have all had these kinds of days but on a station like Deep Space Nine, it seems that the Gremlins are working overtime. Finalizing his repairs everything seems up and running but little does he know, a hidden device begins to activate. As O’Brien continues his duties he begins to feel ill, and stumbles his words in an odd way.  Dismissing it as his exhaustion, he find himself facing exhaustion.  When Major Kira asks for assistance, it soon becomes clear that he can not speak normally.  Every word begins to come out wrong and he rushes to sickbay to determine the problem.

Meanwhile, Quark’s business is down as the Promenade replicators are down.  Knowing he has to wait for repairs, he hacks the system and finds replicators that are not being used to serve his customers with. Before long, business is booming again…but at what cost?

At Sickbay, Julian tries to find a solution to his illness but can’t seem to find the cause of O’Brien’s malady. Soon the illness begins to spread to other officers aboard the station with Jadzia Dax falling ill soon after.   Julian begins to investigate and finds a virus has infected both Miles and Jadzia that deliberately deletes key connections in people’s brains. It soon becomes clear something needs to be done soon or they will be unable to run the station.

While on the Promenade, Ben Sisko is confronted by Jaheel, a freighter Captain who is desperate to get his cargo to it’s destination before it spoils.  Sisko explains that no one can leave until they determine the cause of the virus.  Jaheel leaves, clearly upset. 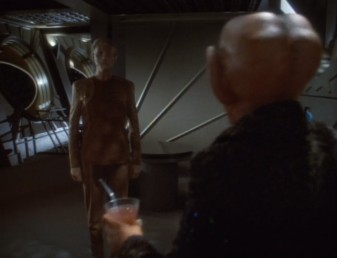 Suspecting Quark is up to no good, Odo disguises himself as a cart and catches Quark in the act of using a replicator in one of the crew quarters.  Little does he know, he has been infecting the rest of the station with the virus that is causing the language issues.  Bashir suddenly realizes that the virus is now airborne and the entire station is infected.

Kira begins to investigate everything that O’Brien has worked on and soon discovers the device responsible for the virus.  Suspecting the Cardassians have sabotaged the station, Kira continues her investigation.   Soon Benjamin Sisko learns that his son Jake is among the infected.

As Kira investigates, she soon discovers that the device was installed by Bajoran resistance at the time of the stations construction as a booby-trap.  Unfortunately the trap was never set and O’Brien inadvertently set it off.  Just as it appears they are making headway, O’Brien begins to exhibit symptoms of a deeper illness.  In less than 12 hours, he will die if they don’t find the cure.

Kira continues to dig and finds that a Bajoran known as Dekon Elig who may be the one who created the virus.  Just as Julian begins to make some headway, he too begins to exhibit signs of the virus.   Meanwhile, Kira tracks down the person who witnessed Dekon’s death and finds Surmak Ren who, upon hearing about the virus, refuses to assist. She immediately decides to kidnap Surmak by beaming him aboard a runabout, using his exposure to the virus as leverage to get him to help them. After informing him of his situation, and that she has infected him as well, the Doctor reluctantly agrees to help them find a cure.

Realizing that they desperately need people to run the station, Ben Sisko enlists Odo to help him at ops.  Odo is reluctant but understands that he may be one of the only people that is immune to the Virus.   Just as things couldn’t be worse, Jaheel, the freighter captain, decides to leave the station.  Desperate, he begins to pull away without being released but refuses to shut his engines down. The Freighter, in danger of exploding, continues to try to break away.  After reluctantly getting help from Quark to run ops, Odo rushes to the docking ring and manages to save the infected captain just before his ship explodes.

In the end, Surmak Ren finds a cure and is able to administer it to the crew of the Station. It appears that things are back to normal on Deep Space Nine, even the bad coffee.

This is one that, while it is a familiar trope, the cast and crew do a great job making it their own.  The main aspect is one of communication and how, without clear means of communicating, a group of people can not function properly.   In this case, not even written language works and so fear and paranoia begin to set in.

One aspect that I loved about the episode is that it really begins exploring the relationship between Quark and Odo.   Theirs is a unique one as, while they are on opposite sides of the law, they both have a mutual respect for one another that borders on friendship.   They know that, in reality, they each make one another stronger and, despite their constant struggle with each other, they need each other to succeed.  This relationship has been hinted at in the past few episodes but only now is beginning to be explored.

We also get a chance to really see how much Ben Sisko cares for his son Jake. Every chance Commander Sisko got, he was there comforting Jake even before his son became infected by the virus.   There seemed to be a real connection between the two characters with actors Avery Brooks (Benjamin) and Cirroc Lofton (Jake) doing all the heavy lifting.  If you had any doubt that this father cared for his son, it was gone by this episode.  It was clear that this was a man who, after having lost his wife, wanted to do everything he could to ensure the safety and well-being of his son.

This episode is eerily similar to the 1980’s Twilight Zone episode entitled Wordplay In that episode, a man discovers that everyone’s language has changed but his own and must relearn a new version of the English language.  It is a sad and impactful episode about communication but this DS9 version goes a little further with that story.

We get to see that O’Brien is basically the stations handyman.  I guess Chief of Operations means he gets to fix…everything.   Dude needs some help!

Thanks for reading the Retro TV Review,  I look forward to discussing the rest of the series with you, one episode at a time every Monday, Wednesday and Friday!  Next Review: Captive Pursuit