Hunting.  While it is both a necessary evil to survive and a national past time for many, hunting has come up as a plot point in many works of fiction.   For big game hunters, finding the ultimate challenge is their dream.  Bigger, better, stronger, faster, more cunning, more deadly, all of these attributes are things that drive people to hunt more dangerous prey.  What if you could genetically develop a species that would be the ultimate prey?  Even though their entire purpose is for this, would it still be right to hunt and kill them?

This question and more is explored in the episode that originally aired on January 31.1993.  This is Captive Pursuit.

Deep Space Nine welcomes its first visitor from the Gamma Quadrant, only it seems that this visitor is fleeing someone or something else… 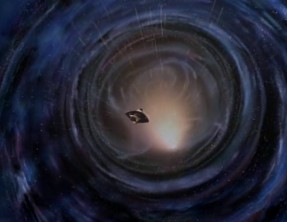 As Commander Sisko deals with a complaint against Quark, a ship arrives from the Gamma Quadrant.  The pilot of the ship appears stressed and frightened and his ship seems to be in danger of exploding.   Using a tractor beam, O’Brien brings the visitors ship in and Sisko sends O’Brien to meet with their new visitor.

O’Brien arrives and finds the ship empty.  Beginning repairs, he is surprised when the visitor appears out of nowhere using a chameleon type ability. The alien identifies himself as Tosk and is clearly unsure of himself and his surroundings.   O’Brien soon takes Tosk on a tour of the Station, hoping to discover more about their first contact with a Gamma Quadrant alien. After their tour, O’Brien takes Tosk to some quarters and leaves him to get some rest.  While in there, Tosk asks the computer where to find weapons on the station.

The next day O’Brien and Tosk continue repairing Tosk’s ship.  The entire time Tosk indicates that he ‘doesn’t have time’ and seems to want to leave as quickly as he arrived.  Since repairs will take some time, O’Brien takes Tosk to Quarks Bar to get some R&R.  Later that evening, Odo discovers Tosk trying to break into a weapons locker.  When questioned, Tosk indicates that he needs to prepare.  When asked what he needs to prepare for, he tells Sisko that he can give no answer.  He simply tells them that he is Tosk like it should explain everything.  O’Brien, believing there is more to the story, tries to get more out of his new friend.  Tosk only says that he needs to be let out to be ‘allowed to die with honor’.

Soon another visitor arrives in a ship similar to Tosk’s.  Ignoring hails, the alien ship scans the station and begins to beam soldiers on board.  Rushing to the Promenade, Commander Sisko prepares for a fight.  Within moments the visitors begin to attack. Odo soon realizes that these invaders are after Tosk and appear willing to stop at nothing to get him. One of the invaders makes it to Tosk’s cell and informs the others that he has Tosk and that ‘it is over’.

It soon becomes clear that these invaders are on a hunt and Tosk is their prey. The new visitor indicates that Tosk is a disgrace and will be punished accordingly.  Sisko is not happy with the situation and makes it clear that this man will be taking nothing with him until the Commander gets to the bottom of the it. 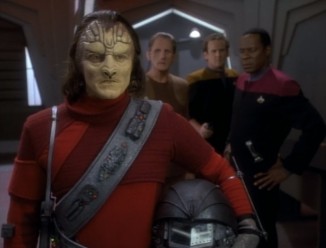 The Hunter explains that Tosk are bred to be hunted and they are an important part of his culture.  Sisko is not happy with this turn of events as the Federation no longer hunts lower life forms, not to mention sentient ones.   Sisko reluctantly agrees to let Tosk go when the Hunter makes it clear they will not be allowed to travel through the wormhole.  O’Brien disagrees and Sisko agrees to keep Tosk safe but only if Tosk asks for Asylum.  When O’Brien offers Tosk asylum, Tosk turns it down, explaining that it is his duty and honor to be hunted, that he longs to die with honor in a hunt.

Knowing that they are sending Tosk to a fate worse than death, O’Brien decides to take matters into his own hands. Miles, escorts the Hunter and Tosk off of the station and, when the moment is right gives Tosk a chance to escape.  Acknowledging that ‘the hunt has resumed’ The Hunter calls his friends to join in to capture Tosk.

Working through the station’s conduits, O’Brien and Tosk make it through to Tosk’s ship. Tosk makes his escape and O’Brien sees his new friend off.

In the end, O’Brien admits to overloading the weapons security system on the promenade.  Sisko indicates that he may have helped his Ops chief in allowing Tosk his freedom.

This one is a retelling of an old story entitled “The Most Dangerous Game‘.  In the original story,  A man finds himself being hunted by other men, making humans ‘the most dangerous game’ since they can fight back and such.   It only makes sense for a series such as Star Trek to touch on such a thing but with a sci-fi twist. 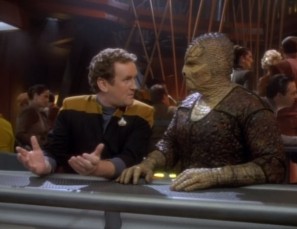 In this episode we really get a chance to see Miles O’Brien in full action. The episode almost goes out of its way to indicate just how much of a main character O’Brien is in this series, no longer being relegated to a supporting role.  It is nice to see him stretch his legs a bit and, honestly really helps keep this new entry familiar for fans of TNG.

The Story itself is great but it seems a little early for Sisko to already be bending the Prime Directive.   I mean, to be honest Miles should be in some serious trouble for his actions but, in a way, this starts to shed a light on how flexible Sisko will be in the future.   This is a Commander who needs to acknowledge all customs of all people as he runs what amounts to an intergalactic Airport. Being on the fringes of Federation Space, he gives himself a little leeway from time to time to make his own executive decisions, and trust me, this is by far the lightest of his infractions.

We never seen nor hear from Tosk nor the Hunters again in the series.  I guess the Hunter kept his word in making the wormhole off-limits to The Hunt.

It is heavily implies that Tosk are genetically bred by the same people who breed the Jem’hadar, a species we will meet later in the series.

We learn that everyone is scanned for weapons when they arrive in the station, providing further security for the inhabitants and visitors.  This will later, of course, be loosely used as the story permits.

I found it interesting that both Tosk and the Hunter had the same nose.  Seriously, look at the pictures above.  This highly implies that Tosk is built from the same species as The Hunters. Maybe a lesser caste or…clones? Creepy huh?

I did find it a bit of a security flaw for someone to be able to ask the station computer ‘where are the weapons’ and it show them.  I mean, that seems to be a serious issue Odo needs to fix.

Thanks for reading the Retro TV Review,  I look forward to discussing the rest of the series with you, one episode at a time every Monday, Wednesday and Friday!  Next Review: Q-Less