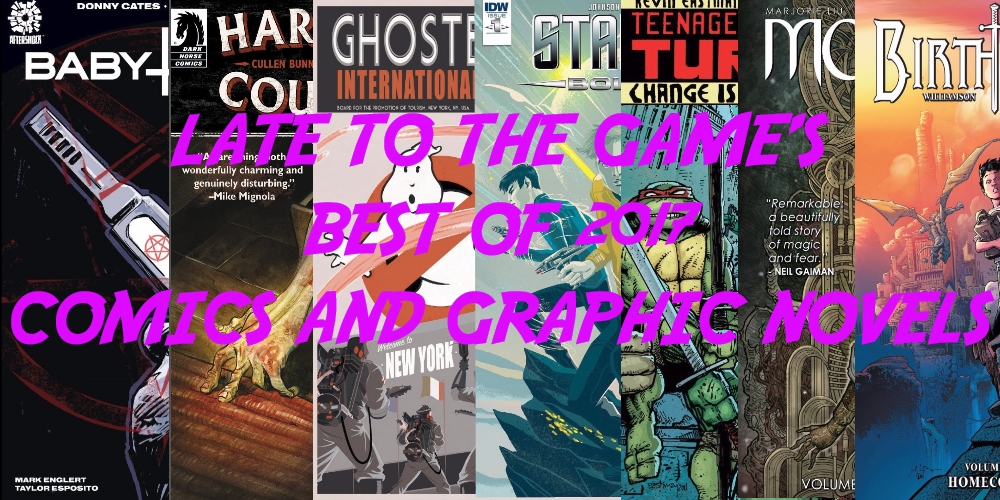 I love comics and graphic novels. Not just superhero comics, but everything from horror, to scifi to fantasy. As a fan I try to expose myself to every kind of story available and, in doing so, I have read quite a few. Every year I like to create a list of my favorite comics that I read that year, they don’t necessarily have to be from the current year, just ones that I read that year. So without any more delay, I present in no particular order, My Favorite Comics and Graphic Novels I Read in 2017. 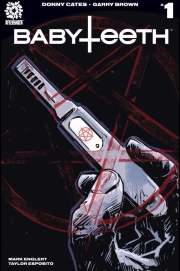 This first one is from a relative newcomer to the comic publishing market, Aftershock Comics. Written by Donny Cates with art by Garry Brown, BabyTeeth is about a young woman who has given birth to the Antichrist and is doing all she can to raise him well. Of course, being the Antichrist tends to attract attention.

The comic starts in the future with the baby’s mother, Sadie, recoding the story of her son so that he knows everything that has happened in his life. We follow Sadie, her sister and her father as they encounter religious zealots and satanists trying to get their hands on Sadie’s child. What will happen to them? Will the Antichrist end up with a normal childhood? Of Course not.

Horror comics have always been something I have enjoyed and when Cullen Bunn (The Sixth Gun) and Tyler Crook (of B.P.R.D.) announced they were doing a Southern Gothic style Horror comic, I was all in.

The story follows Emmy, a young girl who may be the heir to a power that was thought sealed away by the townsfolk upon the death of the vile witch Hester Beck. However, sometimes evil finds its way back and sometimes that evil doesn’t show up exactly where it is expected. Full of Haints and Haunts, this is a perfect book for the fan of campfire tales and spooky stories of the past. 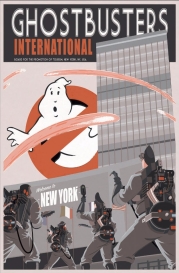 I have a soft spot for the Ghostbusters and when IDW launched a continuing series from the original movies (including the hit video game as canon) I was stoked. This series is deep into the ongoing comic line but focuses of the guys being called to go International by being contracted out to help overseas.

The dialogue is spot on, the art is solid and consistant and the tone is perfect. As it is next to impossible for us to get another sequel to the original movie, this is the only true continuation of the franchise that taught us not to be afraid of no ghost. 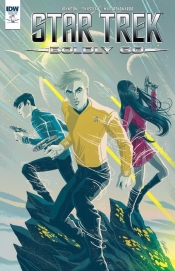 As a Trekkie it would be expected of me to hate the modern Star Trek Movies as done by JJ Abrams. Nothing could be further from the truth. I really enjoyed the modern interpretation of Kirk and crew on the big screen (yes, even Into Darkness) and when a continuing comic was announced, I had to give it a try. In the latest incarnation of the comic, Boldly Go, the crew of the Enterprise has been reassigned to various ships after the events of Star Trek Beyond and are all learning to cope with the change and separation from their crewmates. Kirk and McCoy have both been assigned to the Endeavour and their first encounter is with none other than a species of whom resistance is futile. A perfect continuation to the Kelvin Universe franchise, this is a must read for any fan of Star Trek. 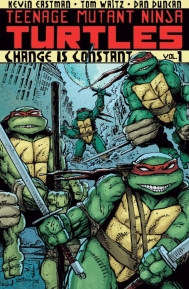 The Ninja Turtles have been a part of my life ever since Eastman and Laird started their black and white parody of DareDevil (it’s true look it up). From the on, the Turtles have mutated from a hard hitting comic to a fun crazy comic, to live action interpretations and on. When IDW announced in 2011 that it was working with Kevin Eastman again for a brand new comic series, the kid in me was elated. This was to be a whole new take on the Crime Fighting Teen Team and it was sure to be amazing. And It is.

With a terrific art team and incredible Story Arcs this book continues to deliver even after being out for nearly eight years, it continues to be one of the best series on the shelves. I highly recommend picking up the first Trade Paperback collection entitled, Change is Constant. 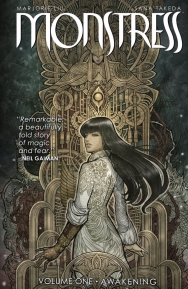 Image continues to put out some of the industry’s most innovative and original titles and this one is no exception. Monstress by Marjorie Lio and Sana Takeda is a gorgeous book with an amazingly well written story.

Following a young woman who is fighting for survival in an Alternate universe matriarchal 1900’s Asia, Maika has a unique connection with monster that gives her access to forbidden and dangerous powers.

With Tremendous art and a compelling story, this is one that I will keep picking up as quick as they are released. The first two trade paperbacks are out now and deserve a place on your shelf. 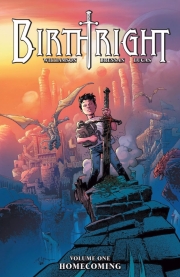 Finally, Birthright. Taking the classic fantasy trope of a child becoming a hero and flipping it on it’s head, Birthright is as unique as it is exciting. The story is about a young boy named Michael Rhodes who, after getting lost as a child, ends up in a fantasy realm in which he is instantly recognized as the kingdoms foretold savior. Familiar right? Then, the twist. He fails and then returns home as an adult to a family who is broken from his disappearance and a secret mission that only he can fulfill. The catch? In our world it has only been a short time since his disappearance, for Mikey it’s been a lifetime.

Created By Joshua Williamson and Andrei Bressan, Birthright has so many twists and turns I look forward to each trade paperback as they are released.

So there you have it. My picks for 2017. Where can you get any of these titles I just told you about? You can find them here on comixology or get it from your local comic shop! If you don’t have a local comic shop, I recommend unknowncomicbooks.com, they do good stuff.

Thanks for reading, If you would like to read more reviews I have a weekly series called Key Movies Of My Life that comes out every Wednesday and also a complete review of Star Trek Discovery. Be sure to check out our contributor Darkmovienight with the New Movie Reviews every Sunday.

As always, please feel free to comment below and share your experiences with these movies as well. If you just happend by, tell me what you think! Don’t Forget To Follow us if you like the blog!

5 thoughts on “My Favorite Comic series & Graphic Novels of 2017”