Sometimes an episode is about the crew as a whole but sometimes a certain member is the focus of the story and this one falls into the later.  Picard is front in center as he is kidnapped and must find his way back.  Originally Airing on March 26, 1990, this is Allegiance.

Picard is kidnapped and replaced by a doppelganger by a group of aliens who are studying him and the Enterprise. Picard soon finds himself trapped in a room with other abductees while the crew of the Enterprise begin to wonder if something is wrong with their Captain.

There are two stories here so I will break them down with Story A) Picard Captured and B) The Doppelganger.  We will start with the A story. 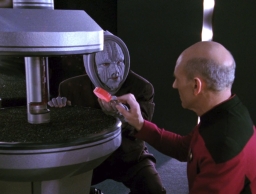 After Picard awakes in his captivity he gets to know his fellow abductees.  Initially there are two others and an empty bed.  One of the abductees is a young female Bolian from Starfleet Academy and the other is a Mizarian names Kova Tholl.  The third bed is empty implying that another is going to join at some point.

Picard attempts to contact their abductors and starts to get to know his fellow captives. As he talks with them the fourth captive appears, a Chalnoth named Esoqq appears and immediately pulls his knife threatening to attack.  Picard talks him down, explaining that they are also trapped.  He calms down and as they talk they soon discover that the food provided is not edible by the Chalnoth.  He must eat in the next three days or one of the captives may be in danger.

They begin their escape attempt only to find it impossible to escape as, he moment they breach the door, they are attacked by an odd green light. Soon after the group begin to blame one another for the failure.  They each start to see elements of each other that doesn’t line up.  As they all talk, the cadet mentions a mission that she could not have known about.  Picard immediately suspects that she may be a spy. He settles the group and begins to formulate a plan.  They work together again to open the door only to find a wall behind it.   This was nothing but a rat maze.

After the failure, Picard confronts the cadet and tells her that this isn’t a prison, it is a lab.  They have all been in there for a test and she is the only one that doesn’t quite fit the mold.

She reveals herself to be a trio of Aliens that have been studying them all.  They take them back to their places of origin. 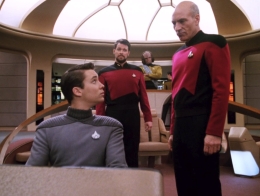 As the Enterprise rendezvous with the USS Hood, NotPicard commands Wesley to set course for a nearby Pulsar.  Riker attempts to contact the Hood to let them know they will be late but NotPicard stops him.  NotPicard explains that for the next few days he will not be able to share the reasons behind his orders and apologies ahead of time.  Riker understands and goes on his business.

NotPicard continues to go about the crew asking off questions and doing things that is out of character.  He visits the Doctor for a random checkup, he asks Geordi to increase engine efficiency, he asks Troi if the Crew trust him implicitly, he even asks Doctor Crusher on a date.  He seems to be gathering information of some sort but so far there is no specific pattern to his actions.

On his date with Doctor Crusher, just as NotPicard gets Crusher to a point where she is interested in taking things further, he ends the date and escorts her to the door of his quarters seeing her out. This thoroughly confuses the poor Doctor.

Riker begins to suspect something is not right about the Captain when NotPicard walks into Ten-Forward. Acting out of character, he walks in praising the crew and then ‘buys’ Ales for the entire bar.   When he starts to sing, Riker and the senior staff are certain that this is not the Picard they know. 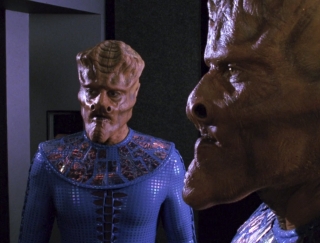 Picard and the aliens return to the ship and they explain they wanted to study their characteristics.   Picard signals Riker and they trap the alien beings in a force field.  They beg for their freedom and promise not to interfere with them again.  He warns them not to come back and kicks them off the ship.

This is an interesting one.  It is excellent sci fi in every way and really comes off as a truly original STNG story.  This is completely a Picard episode and that seems to be the trend this last half of the season, focusing on a singular character to further their character development.  Patrick Stewart gets a chance to play two roles in this one, both versions of himself.  In it, he gets a chance to really breakout of his character while being NotPicard and gets to explore Picard’s survival instinct as the captive.

This episode also embraces the fun side of STNG in a way that we haven’t really seen yet.  NotPicard sings with the crew, there is a light moment on the bridge between Picard and Beverly Crusher.  It seems that the cast have finally gotten comfortable with each other and it really shows that they are, indeed, a family.

All in all it is a good episode and, while it is not ‘one of the best’ it is very solid all around.

I LOVE the scene when NotPicard sings.  The song itself is one that I will occasionally sing when working on something in my best Patrick Stewart voice.  I imagine that this is what Patrick Stewart is really like in real life.

This is the first time that Picard visits the Poker Game but it really doesn’t count as it wasn’t really Picard.

We never see or hear from the Kidnapping Aliens again.

We never see a Chalnoth again but we do get a brief glimpse of another Mizarian again later down the line.

Thanks for reading the Retro TV Review,  I look forward to discussing the rest of the series with you, one episode at a time every Monday, Wednesday and Friday!  Next Review: Captain’s Holiday