The return of an old foe and a vendetta realized.  Originally airing on February 3, 1997, this is For the Uniform. 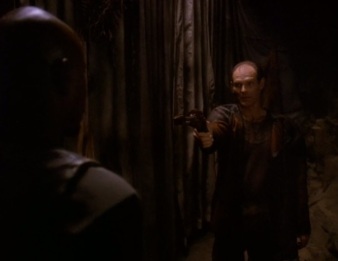 Planning to meet with an informant who claims to have information about Eddington, Sisko finds himself face to face with the man he is in pursuit of.  Despite Sisko’s accusations, he finds that Eddington refuses to accept that it is the Maquis’ fault that there are still displaced people suffering with no homes.  Eddington warns Sisko that should the Captain pursue him further, it will not result in the end Sisko wants. Ignoring this warning, Sisko beams back aboard the Defiant and begins his chance of Eddington’s ship. 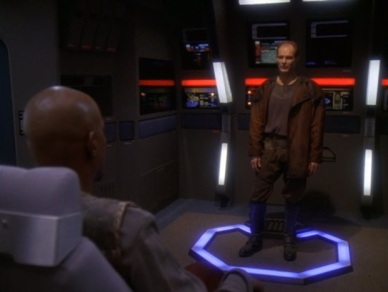 Testing their new Holographic communications display, Sisko contacts the USS Malinche and informs their captain of his plans to chase down Eddington.  Just as they approach Eddington’s ship they find that the Defiant is no longer responsive.  Sisko demands answers only to have Eddington appear via the holocommunicator and warn Sisko that the Defiant has been infected with a virus that will prevent their continued pursuit.  Eddington then begins to attack the defenseless ship proving that he has the upper hand.  Sisko soon finds himself in a stalemate forcing him to return to the station by being towed by the USS Malinche.

Back on the station O’Brien informs Sisko that it will take at least two weeks to prepare the Defiant and Odo indicates that he was able to disable booby-traps aboard the station as well.  Soon Sisko learns that two Bolian freighters have disappeared in the badlands but they are not sure what Eddington wants with their cargo.  Sisko is further disappointed when he learns that Starfleet has ordered Captain Sanders, the Captain of the Malinche, to take over the pursuit of Eddington as they feel that Sisko is too close to the issue at hand.  Sisko wishes Captain Sanders luck in his pursuit but it is clear that Ben is not happy with Starfleet’s decision.

In the Holosuite,  Sisko finds himself taking his anger out on a punching bag with Jadzia there as his sounding board.  He is furious that Eddington got the best of him even though he worked with the man, even promoted him.  His anger gets more intense when he learns that Eddington has released a biogenic weapon on a Cardassian colony forcing the Cardassians to begin evacuations of the colony affected.  The USS Malinche is too far from the attack to be of any use so Sisko and the crew are forced to resume their pursuit of the traitor.

With only half of their systems online, O’Brien warns that the Defiant is far from battle ready.  With the communication systems out, O’Brien informs the Captain that their only source of communication on the ship will be through Starfleet Cadet Nog.  Additionally, they have no targeting, no cloaking device, no transporters, no replicators and limited maneuverability.  Sisko admits to Dax that he may be taking the crew in for a rough ride but she indicates that, next time she goes off half cocked on some wild-eyed adventure, he needs to be more understanding. 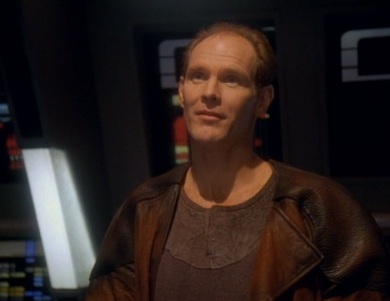 Taking the Defiant out on their mission, Sisko runs the ship through battle drills as they head to the Badlands.  Running the ship like a classic Submarine, the Defiant finally arrives at the Badlands where they come in contact with Eddington and his ship.  Eddington appears via the holocommunicator and informs Sisko that he is sending Sisko a gift, a copy of Le Miserables.  Eddington likens Sisko to the character of Inspector Javert who spent the story chasing down a single criminal over the theft of a loaf of bread.  Soon Sisko discovers that the signal they received was a fake and that Eddington had planned a this as a distraction for the Defiant.  Just as they leave the badlands, a distress call is received by the USS Malinche which has been rendered dead in space.  Contacting the Malinche, Sisko supplies the ship with a damage control team to assist in repairing the damage done.

Back in pursuit, Odo contacts the ship via the holographic Communication systems where he informs Sisko that he has received a strange transmission of a Breen nursery rhyme.  Odo believes that the message indicates that Eddington is heading to a Breen settlement for more of the Biogenic weapon.  Heading to the settlement, they soon find that the Maquis have been active in the area.

Narrowing the Maquis raid to Quaral Prime, Sisko takes the Defiant in for attack and begins to try and deflect the Maquis’ raid.  Soon Eddington attacks a Cardassian transport ship giving Sisko a choice, save the innocent Cardassians or chase Eddington.  Sisko chooses the former.

With the Cardassian Transport saved, Sisko finds himself reading the book Eddington sent over.   It is there that Sisko realizes that Eddington identifies with the character Jean Valjean and believes himself to be the victim of a monstrous injustice.  Eddington is living his own fantasy being the leader of the Maquis.  Sisko decides to give Eddington exactly what he wants and decides to become very villain Eddington so desires. Ordering Worf to prepare two quantum torpedoes, Sisko sets course to the nearest Maquis settlement and plans to detonate trillium in the atmosphere rendering the planet uninhabitable to all human life. Announcing his intent to the Maquis, Sisko heads to the colony to fulfill his mission.

Just as Sisko is about to launch his attack, Eddington appears on the Holocommunications system claiming that Sisko is bluffing.  Sisko proves he is not bluffing when he launches his attack. Eddington is shocked at Sisko’s determination and begins to plead for Sisko to realize how far he has fallen.  Sisko holds his ground and Eddington agrees to not only turn in his biogenic weapons and surrender to Sisko if Sisko agrees to stop his attack.

Sisko agrees to the terms and escorts Eddington back to DS9 to face a court martial.  Having planned ahead, Sisko allows the colonists to essentially swap colonies as their previous homes are no longer habitable to them, further balancing the region.

We finally get some resolution in the pursuit of Eddington while getting some excellent character development for Captain Sisko. 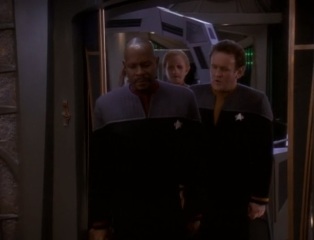 Since Eddington’s betrayal, Sisko has had a deep dislike for the Maquis traitor and this feeling has been festering ever since.  While it was not apparent in his actions, Sisko has been steadily tracking Eddington down behind the scenes and, when he finally get’s his chance, he strikes.  While we will see more of his morally grey side as the series progresses, Sisko’s actions in this one really show just how different a commander Sisko is compared with the likes of Picard.  Sisko is clearly not afraid to take risks even when those risks could cost him his own career by crossing the lines of morality and Starfleet regulations. For Picard, the thought of poisoning a planet or even risking his own crew to capture a single enemy would be ludicrous. ( Okay, Picard sorta did that very thing in First Contact but I am talking about episodic Picard not movie Picard.  There are some differences there.) 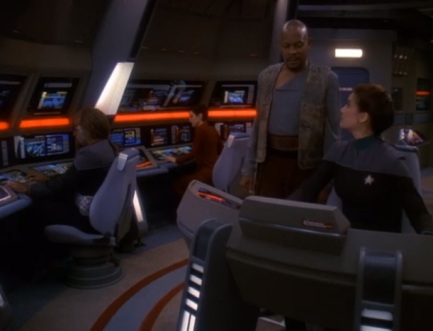 In many ways, this ability to take command and make executive decisions like this is what makes Sisko a stronger and more reliable Captain than Picard.  Not since Kirk have we had a commanding officer who used what has become known as ‘Cowboy Diplomacy’ and it is certainly a breath of fresh air.  Ironically, both Sisko and Kirk were out on the frontier and are forced daily to find new and interesting ways to survive.  If Kirk was the Wagon Tain to the Stars then Sisko serves as the equivalent to Marshal Matt Dillon of Gunsmoke, taming the west while protecting the citizens of Dodge City.  You know that Marshal Dillon would never let a traitor go without a fight and neither will Ben Sisko.

Overall, this episode was a wonderful one showing, not only Sisko’s resolve, but how well oiled the crew of DS9 is in tense situations.  Even without the usual ship’s functions, this ragtag group manage to push through, showing that they are one of the finest crews in Star Fleet.

Thanks for reading the Retro TV Review,  I look forward to discussing the rest of the series with you, one episode at a time every Monday, Wednesday and Friday!  Next Review: In Purgatory’s Shadow