Love is in the air…well lust at least.  It seems at least one episode of Star Trek in every series has to deal with sex and/or mating, why not get it out of the way now.   Originally aired on September 18, 1995, this is Elogium.

Kes begins to have an interesting reaction to the presence of a swarm of space slugs who have become attracted to the Starship Voyager. No, seriously.

After Chakotay catches a couple of crew-members kissing in the turbo-lift and Neelix once again becomes jealous of Paris and Kes being friends, Janeway orders the crew to investigate some strange energy readings they have detected.  Heading to the mysterious magnetic disturbance, Chakotay fills Janeway in on his encounter with the kissing crew-members.  Janeway notes that, if this journey home proves to be as long as they think it will be, the crew might have to start pairing off sooner than later. Soon Voyager encounters the disturbance only to discover that it is a swarm of space-faring slugs.  Janeway makes note of it and takes voyager on it’s way.  The End… 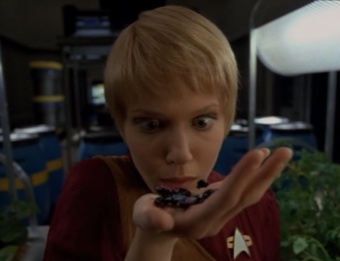 Man I wish this was true, of course Janeway orders them closer to the swarm to study them, because of course they didn’t learn anything from the last few times they studied something.  Meanwhile, Kes begins munching on bugs in her hydroponics garden and it freaks her out.

Okay.  I will cut this one short.  I mean, seriously the plot to this one is a little silly to say the least.  Here is the short version. 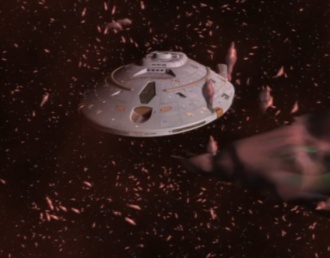 The crew of Voyager find a way to make the ship unattractive to the HSS and get away causing the Elogium to subside and for Kes to get back to being the non-pregnant teenager.  In the end Janeway learns that one of her crew, Ensign Wildman is indeed pregnant and it seems there will eventually be a baby on board Voyager after-all.

I get it, I mean, Kes is an alien so her species does things differently when it comes to…well everything. That in and of itself gives this a little suspension of disbelief but the execution felt a little forced overall. Seeing that every time Voyager has altered course to ‘investigate’ something has resulted in some pretty catastrophic events, what should have happened is simple.  Janeway makes note of the swarm, sends out a probe and then kept going. But no, of course Janeway HAS to explore this swarm even when the last few space dwelling aliens they encountered resulted in some less than desirable events.  Yeah, that’s pretty responsible.  Come to think of it, shouldn’t Neelix have familiar with the area enough to know about a swarm of Space Sperm that traveled this area… 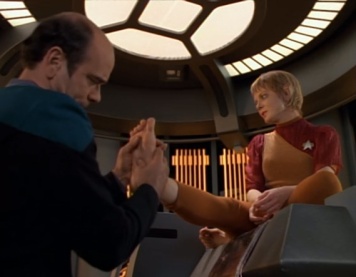 While the plot is pretty ridiculous, the cast does everything they can to make it work.  I can’t fault them for this horrendous story and it is clear that they do their best through and through despite the rather obvious and rather creepy teen pregnancy story-line.  Thankfully this is a one time thing and we don’t have to worry about this again.

All is not completely lost though, we do get some rather nice interaction between Kes and The Doctor that establishes his place in her life.  To her, he is the father figure that she no longer has and comes to him for advice when she is concerned about having a child.  It’s a pretty great moment giving Jennifer Lien (Kes) some great moments.

Overall, Skip this one. Seriously, it is not really worth your time. If you are determined to watch Voyager in it’s entirety, then use this time to do the dishes or your laundry or building that book shelf you promised your partner you would make. 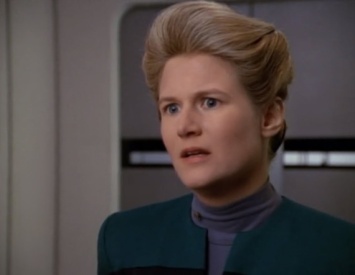 Thanks for reading the Retro TV Review,  I look forward to discussing the rest of the series with you, one episode at a time every Monday, Wednesday and Friday!  Next Review: Non Sequitur