Montgomery Scott, arguably the best engineer in Starfleet, or at least the most celebrated finds his way to the 24th century. Marking the return of the iconic Scotsman in the episode that originally aired on October 12,1992, this is Relics.

The Past and Present collide when Montgomery Scott, former chief Engineer of the Enterprise, is discovered trapped in a transporter beam aboard a crashed transport vessel.  However, the reunion is cut short when what his ship is crashed on begins to cause problems. 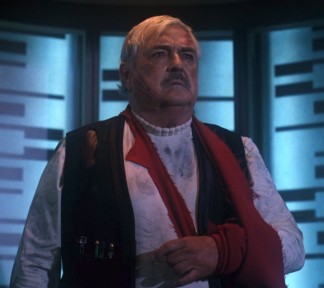 The Enterprise receives a distress signal from a ship that had disappeared more than a century before.  When they go to assist they not only find the ship, but a large planet like object that causes the ship to go out of warp.   They soon discover that what they have found may be a Dyson’s Sphere, a massive sphere that surrounds a star and may have civilizations living within it. On its surface they find the wrecked USS Jenolan and, when they reactivate the ships transporter (complete with classic TOS transporter sounds) they retrieve the legendary Engineer, Montgomery Scott.

Scotty is beamed aboard the Enterprise shocked to learn that he has been in the transporter buffers for nearly 75 years.  LaForge takes him to sickbay to repair his arm and there he meets Captain Picard.   Jean Luc invites Captain Scott to talk with him about his past and, when LaForge plans to go to Engineering, Scott is keen on a visit.  Unfortunately he Scott is told to rest by Dr Crusher and he is taken to his guest quarters.  There, in shock at the level of comfort, he finds himself bored.

Soon Scotty finds his way to Engineering where, to Geordi’s dismay, Scotty volunteers to assist. Unfortunately, while there, Scotty finds that he is a man out of place.  He doesn’t understand the new technologies and keeps getting into Geordi’s way.  Scotty’s feelings are hurt after Geordi tells the old Captain that he is ‘in the way’.  Scotty soon finds Ten-Forward where he encounters Data at the bar.  There he discovers a distaste for synthohol and, after Data finds him some ‘green stuff’ he wanders his way to the holodeck asking to see the bridge to the Enterprise.   When countered by the computer as to which Enterprise, he replies, ‘NCC-1701, No Bloody A, B, C or D’.

While there, mourning his old friends, Picard visits him and begins to talk about his past.  They share a drink and Scotty tells Picard that the original Enterprise is the one he misses most, no matter how many ships he has served on.   Picard and Scotty share stories about their past and how their first duty as a Captain or a Chief will always be the one that they remember most. Scotty indicates that he has no purpose any longer and he has no place on the Enterprise D.  Picard feels for the man out of time and asks LaForge to work with Scotty to access the old records on the Jenolan.  He asks Geordi to accompany Scotty to his ship to help access the Jenolan’s systems and that Picard would like the legendary Engineer to ‘feel useful again’. Geordi agrees and they beam down.

Meanwhile the Enterprise finds a signal emanating from the Dyson’s Sphere and soon discover a large door like structure. Without warning, the Sphere begins to draw them in.  While inside they discover that they can not control the ship and will soon be pulled directly into the star that is contained in the Dyson’s Sphere.  They are soon able to put the ship into orbit and begin to scan the interior surface for life. While scanning, they find the sphere has been abandoned as the star is unstable and is now a threat to the ship and crew.

As Geordi and Scotty work on the Jenolan, they soon discover that they can not contact the Enterprise and believe that they may have left the area. They begin to scan the surface and soon Scotty realizes that they may indeed be inside the sphere.   Their only solution is to get the Jenolan operating again despite it’s damage.  Although it is a long-shot, Scotty manages to get the ship back in operation.  With the ship operating, they devise a way to open the door and use the Jenolan to wedge the door open giving the Enterprise time to escape the Sphere.    The Enterprise escapes and Scotty is once again a miracle worker.

Geordi and the crew present Scotty with his own shuttle, the Goddard.   Scotty tells LaForge that the Enterprise is in good hands, passing the torch to the Chief Engineer of the Enterprise D. 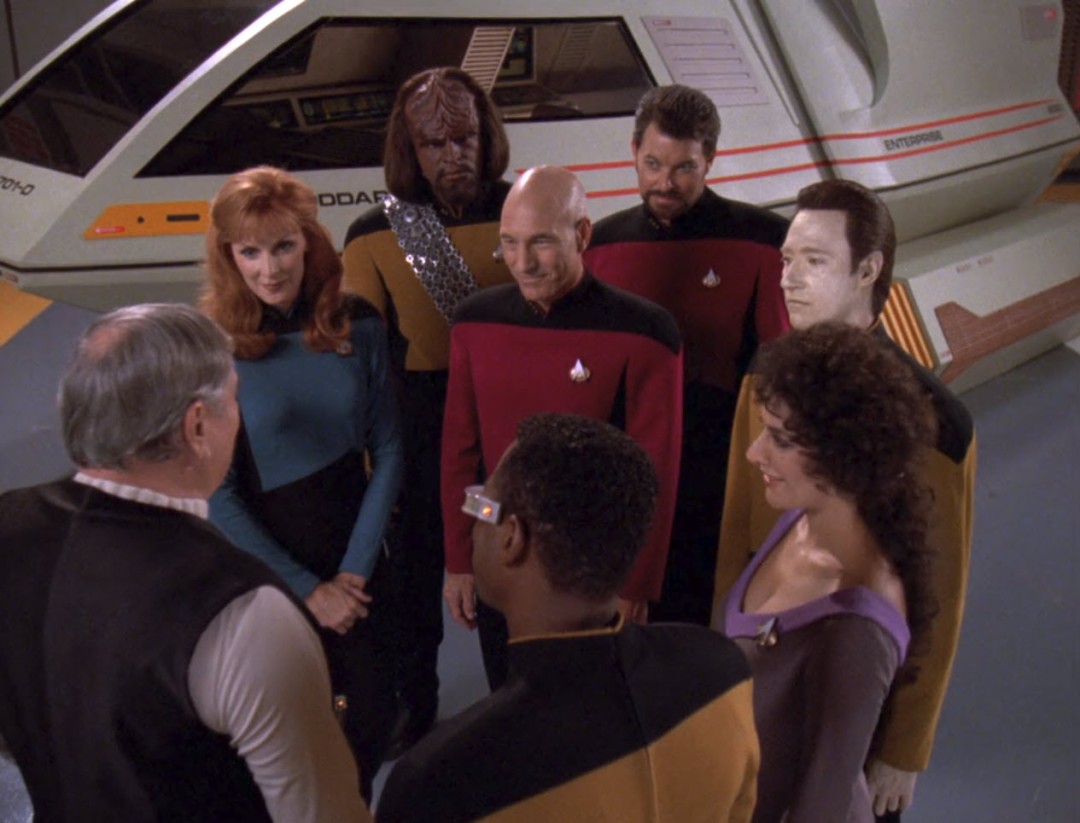 I vividly remember first watching this episode.  When Scotty appeared on the transporter pad I was so very excited.  The fact that Montgomery Scott, Chief Engineer of the USS Enterprise NCC 1701 had returned to Star Trek was enthralling.  The implications of this legend being alive again were amazing, could he be a recurring character, maybe even a new crewman on the Enterprise D?   No.  Not even another guest moment on the new series, Deep Space Nine.  I have read that James Doohan had hoped that this return would lead to a role on a future Trek series but sadly,  it was never to be.  I have to say, that alone makes it such a bittersweet episode to watch.

In many ways this is a direct analogy to how many of the older generation have trouble adapting to new technologies, thinking that they either don’t need it or just know better than what is being showed them.   For instance, It is hard for people who did not grow up with the evolution of computer technology to accept the newer and stranger things as they come to pass leading these people to shun and even be frightened of these new things.  Imagine taking a mechanic from 1918 and dropping them in the middle of a repair shop now?  They would recognize the four wheeled things as cars, might even be able to repair a few things, but much of the technology would be beyond their scope.  For an Engineer who has spent their entire lives working on machines to not understand this new technology, it would be devastating to them.  This is exactly what Scotty is facing in this episode and, it is only when the younger engineer realizes this, that it becomes easier for them to work together.  While Scotty might not have the modern know how to get things done, he does have some insight and lost arts that might make Geordi an even better Engineer in the long run.

As for the episode itself, it is such a pleasure to watch the old Engineer in action once again.  The story itself was another solid classic tale of Scotty saving the Enterprise but also allowing Geordi to be officially welcomed into the pantheon of Legendary Chief Engineers.   I have such fond memories of this episode and it still remains a favorite to this day.

I have to admit, when Scotty requested to see the bridge to the original Enterprise, I was a little shocked.  Scotty really didn’t spend much time there so you would think he would ask to see his original Engineering.

Unfortunately this episode presents a bit of a canonical issue.  Scotty mentions that he knew that Jim Kirk would save him when he hear that Scotty was lost but, in the later movie Generations, Scotty watched Kirk die.  I guess Scotty figured that Kirk would manage to cheat death as well if it meant coming back to save a friend.

Scotty’s reaction to Synthohol isn’t the first time someone from the past comments on their distaste for the drink and it certainly won’t be the last.

We never seen nor hear about the Dyson’s Sphere again even though it was clear that there was an entire world of buildings and culture to explore.  Who made this insanely advanced device and where did they come from? Could this have been the birthplace of one of the many advanced species we have met over time?  We will never know.

We don’t see Scotty again until Generations but we never find out what happens to him in the 24th century either.  I’d like to think he is having some serious adventures in the USS Goddard.

Thanks for reading the Retro TV Review,  I look forward to discussing the rest of the series with you, one episode at a time every Monday, Wednesday and Friday!  Next Review: Schisms