It is said that with every choice a new timeline is created somewhere in the fabric of reality.  Whether this is true or not, it is a theory that has been explored time and again.  What if, somehow, you were able to skip across these timelines experiencing them all for brief moments, what would you see? Who would you be in these alternate times? We get a chance to see this very thing from Worfs point of view in the episode that originally aired on November 29, 1993.  This is Parallels.

Upon returning from a Bat’leth tournament, Worf begins to notice that things are not quite the same on the Enterprise.

As Worf returns to the Enterprise after winning a Bat’leth tournament only to find himself facing a troubling situation.  Riker meets with the Klingon officer and notices that Worf is tense.  Worf confides in Riker that he is worried that the Commander had prepared a surprise party for him due to his birthday..  Although Riker claims he hasn’t, much to Worf’s dismay his friends manage to surprise him anyhow. They present the Klingon with a chocolate cake and inform him that, unfortunately, the Captain can not attend the party.  As the party continues, Worf begins to get a dizzy spell and he notices that the cake is no longer a chocolate cake. Thinking he was mistaken he is shocked when Picard appears and acts as if he had been there the entire time.  Worf later goes to Troi and asks her to be his son’s Soh-chim, basically act as Alexander’s aunt or Worf’s Step-sister.   She agrees to the arrangement. 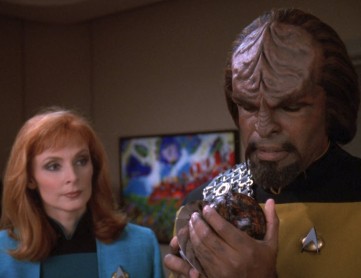 As the Enterprise begins to explore issues with the nearby Argus Array, Worf, La Forge and Data discover that someone is using the array to spy on key locations from within the Federation. As they discuss the matter, Worf gets another dizzy spell and feels as if something is off.  He goes to sickbay where Crusher indicates that he is feeling the results of a concussion.  It appears that he has lost the Bat’leth tournament and was knocked out during the contest.  He is shocked to learn that he has indeed lost the tournament despite his memories otherwise.  Crusher recommends settling back into his routine and that he will regain his memories over time.

Things become more complicated when Worf indicates that a nearby Cardassian ship is the one that had been spying on the Federation.  Picard and Riker know nothing about the logs and this frustrates the Klingon officer.  As he discusses the matter with Troi and LaForge, he begins to faint and immediately notices that the painting Data gave him for his birthday is not the same painting it was prior.  He faints again and finds himself back on the bridge in the middle of a battle with a Cardassian ship.   Worf finds himself unable to perform his duties and accidentally causes the Enterprise to take damage when he is unable to raise the shields.  Worf is relieved of duty at his own request and returns to his quarters only to find that, not only had he not competed in the bat’leth tournament but he is also married to Counselor Troi. 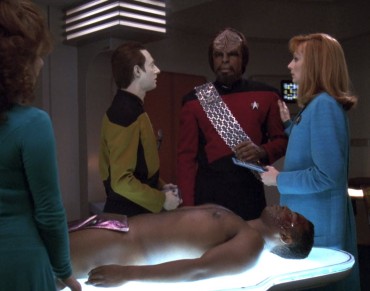 He explains the situation to Troi and she acknowledges that they will find a solution to this problem.  As Data and Worf discuss the situation they realize that Geordi is the common link of when Worf experiences a time anomaly.  When they go to sickbay to talk to the chief Engineer, they discover that Geordi has died from his wounds.  When they activate Geordi’s visor he blanks out again and finds things have radically changed. He is now a Commander and the first officer of the Enterprise, Data detects a strange quantum flux in Worf’s RNA.  Data and Worf discuss the matter with Captain Riker and explains the situation.

Data discovers that Worf is indeed from another universe and they need to find a way to get him back to his own.  They retrace the path he took in his shuttlecraft and find a quantum fissure that could return him to his own timeline.  When a Bajoran ship attacks, it mistakenly hits the fissure and the universes begin to merge making millions of Enterprises appear.  Data indicates that, if they find the Enterprise Worf belongs on, they could fix the timelines and stop them all from merging.  Soon they find the right Enterprise and they begin the process of returning Worf to his proper timeline.

Worf returns to his own timeline and finds that things are back to normal.  In the end he decides that maybe a relationship with Troi wouldn’t be a bad thing. 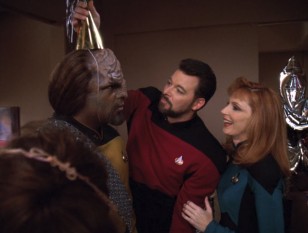 This is one of the better, non-klingon-centric, Worf episodes. While I love the Klingon lore episodes, It is rare for Worf to get an episode of his own that doesn’t involve the Klingon Empire in some form or fashion so it is a bit of a refreshing change.

I love the alternate timelines in this one and, because of this episode, it firmly establishes the viability of the JJ Abrams movies as other alternate timelines.   Many people have issues with those films but, thanks in part to this story, they are within canon and validated in every way. One of my favorite bits is the combadge that is seen in the final alternate universe,  I really wish they had found a way to use those in future series.

The Worf/Troi relationship is an odd one and we get to see the beginnings of that here. I am not sure why they attempted to make the relationship happen so late in the series when everyone knew that she and Riker would end up together at some point.

There are many interesting timelines that occur in this episode.  Among the universes are One where Picard was killed at the Battle of Wolf 359, one where Worf is married to Troi and has two kids with her,  and one where the Borg destroyed the Federation.

We see the return of Wesley Crusher in one of the alternate realities where at some point he becomes a Lieutenant aboard the Enterprise. Seems like the alternate reality Picard pulled some strings but I guess he can do that. This isn’t the last we have seen of Mr. Crusher.

Thanks for reading the Retro TV Review,  I look forward to discussing the rest of the series with you, one episode at a time every Monday, Wednesday and Friday!  Next Review: The Pegasus