Stand Out Albums: Alice Cooper ‘Welcome To My Nightmare’ (1975)

I always talk about how my father had gotten me into specific music and how he loved people like Neil Young, Marty Robbins and more, but what about my mom?  Surely there was some music she enjoyed that I also found influential in my youth.   The answer is, well of course there was and that is the subject of today’s article, the stand out album, Welcome To My Nightmare. 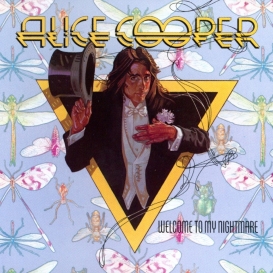 I didn’t get into Alice Cooper as much as I could have but I did enjoy his music thanks to my mother.  She LOVED Cooper and, for a petite country woman from Kentucky, you would never have expected it.  I vividly remember watching the VHS with this crazy looking guy with a painted face and decked in leather.  I thought it was nuts but man did my mom dig this rocker and so, it caught my attention. 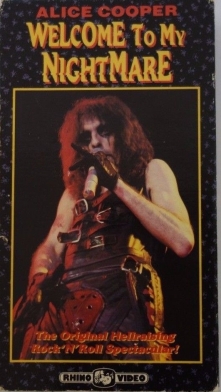 Once I got my hands on the album itself, after living through the insanity that was the live concert on VHS (trust me, it’s weird as hell), I discovered one of the most fascinating horror concept albums I have ever heard.  Following the nightmare of Cooper himself, this album works its way through all things creepy and crawly.   It covers fears both natural (The Black Widow) and unnatural (Steven) and progresses until the final track called Escape in which he is attempting to wake up.  It is one of those albums that, while it has amazing stand alone songs, you must listen to it in its entirety to really appreciate the genius that is Alice Cooper.

For someone who can be easily dismissed as an early glam rock prince, Cooper really shows just how talented he is in this amazingly insane album. With an amazing cover by famed film poster Artist Drew Struzan,  To call it a production is an understatement, this is a horror rock opera and it is an amazing journey for sure. Incorporating horns, strings, rock, ballads and even a really rad cameo from the master of horror himself Vincent Price, this is an album that you must hear before you die.

The first track I have to call out is the track Only Women Bleed.  Commonly mistaken to be a song about menstruation it is actually about domestic abuse and follows a woman going through that very thing.  It is a powerful ballad and one that really showcases Cooper’s talents as a writer and musician. Cooper was a bit of a trailblazer here, discussing something that was hardly even touched upon in 1975 when this album was released.  It’s a dark song, and one that is all too real.

Seven is a creepy little song that really chills me to the bone every time I hear it.  That is why it is one of my favorites.  Cooper channels a frightened child all too well.

Finally, Black Widow.   I loved Vincent Price as a kid and when he appeared on this album I was enraptured.  This is a man who could have read the phone book and I would have lapped up every word.  I miss Vincent but I am glad he can still live on through gems like this. Unfortunately I can’t find a version of the song online that includes the intro since it is technically the end of the second track, Devil’s Food.  You’ll just have to trust me, it’s epic.

This is one that is pretty commonly available. You can grab a copy here for around $10 or just listen to it here via Spotify.

Thanks for reading, If you would like to read more reviews I have a weekly series called Key Movies Of My Life that comes out every Wednesday and also check out some retro tv goodness with the ongoing series Retro TV Reviews here. You can also find a few of my other Music Reviews Here.